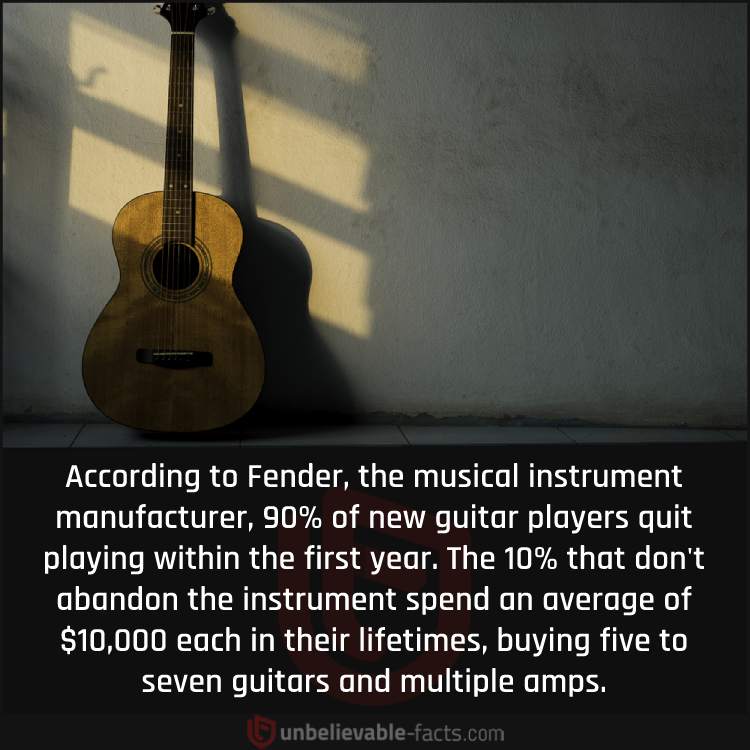 According to Fender, the musical instrument manufacturer, 90% of new guitar players quit playing within the first year. The 10% that don’t abandon the instrument spend an average of $10,000 each in their lifetimes, buying five to seven guitars and multiple amps. 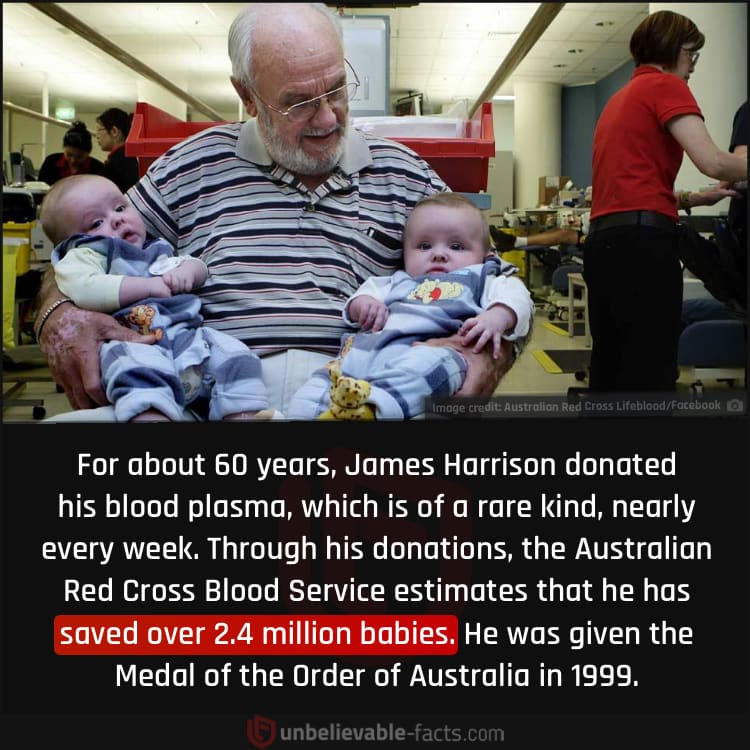 For about 60 years, James Harrison donated his blood plasma, which is of a rare kind, nearly every week. Through his donations, the Australian Red Cross Blood Service estimates that he has saved over 2.4 million babies. He was given the Medal of the Order of Australia in 1999. 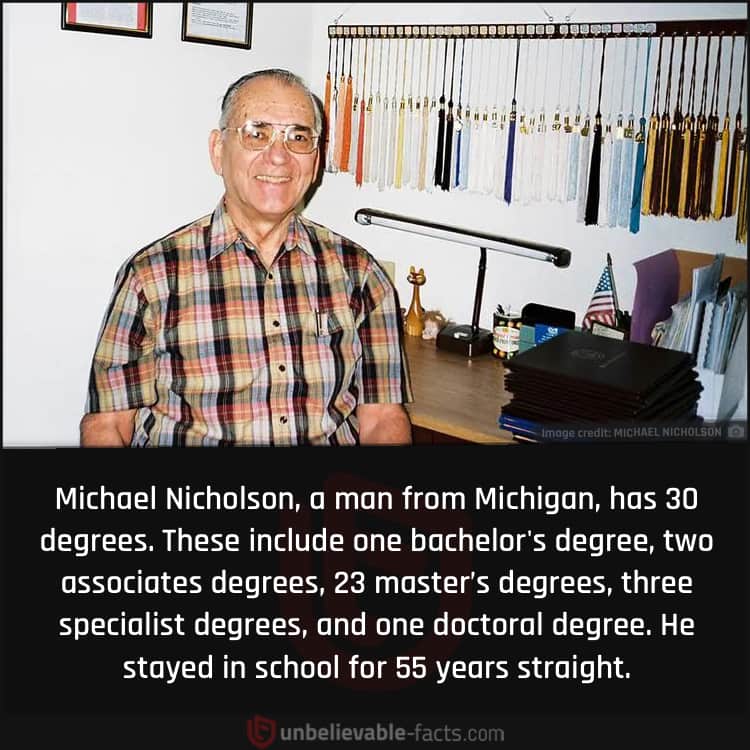 Michael Nicholson, a man from Michigan, has 30 degrees. These include one bachelor’s degree, two associates degrees, 23 master’s degrees, three specialist degrees, and one doctoral degree. He stayed in school for 55 years straight. 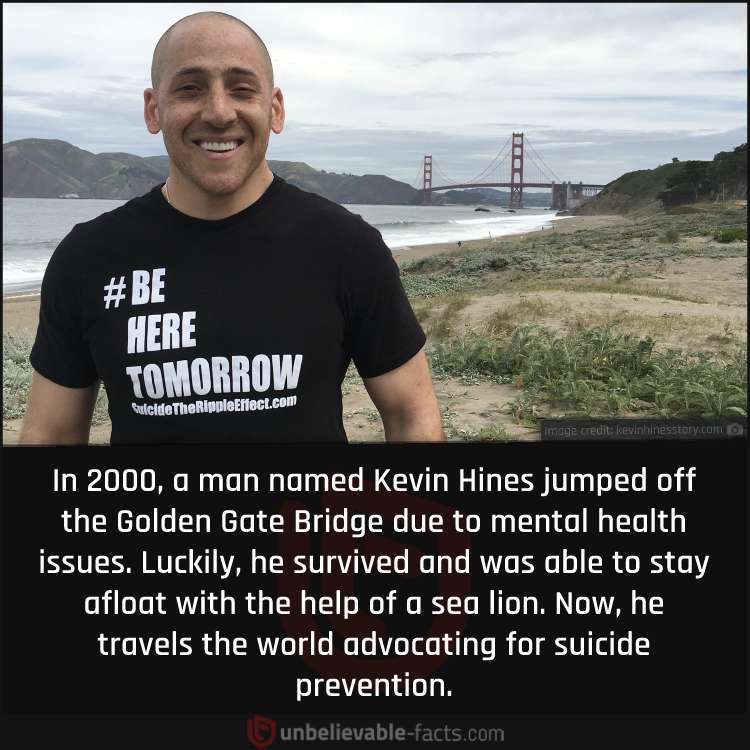 In 2000, a man named Kevin Hines jumped off the Golden Gate Bridge due to mental health issues. Luckily, he survived and was able to stay afloat with the help of a sea lion. Now, he travels the world advocating for suicide prevention. 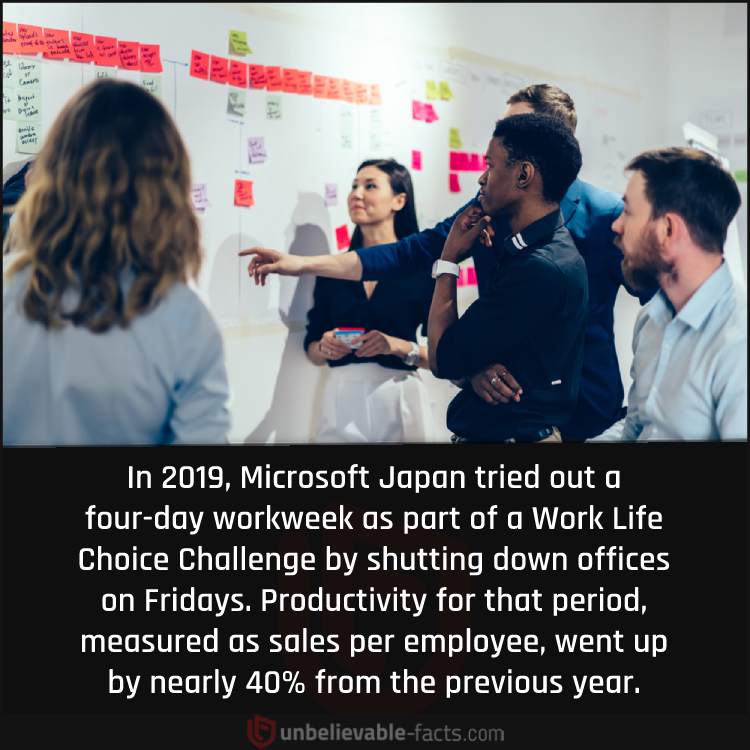 In 2019, Microsoft Japan tried out a four-day workweek as part of a Work Life Choice Challenge by shutting down offices on Fridays. Productivity for that period, measured as sales per employee, went up by nearly 40% from the previous year. 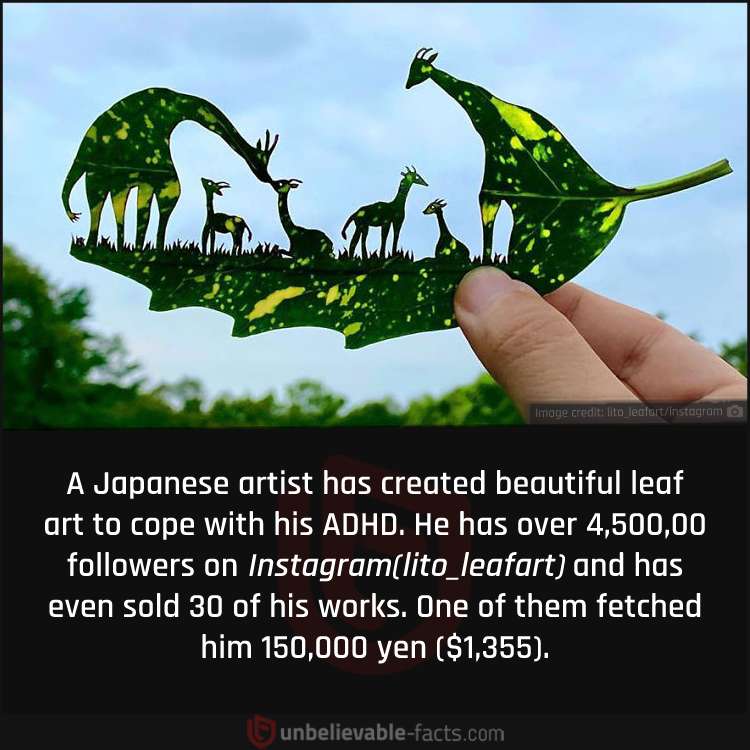 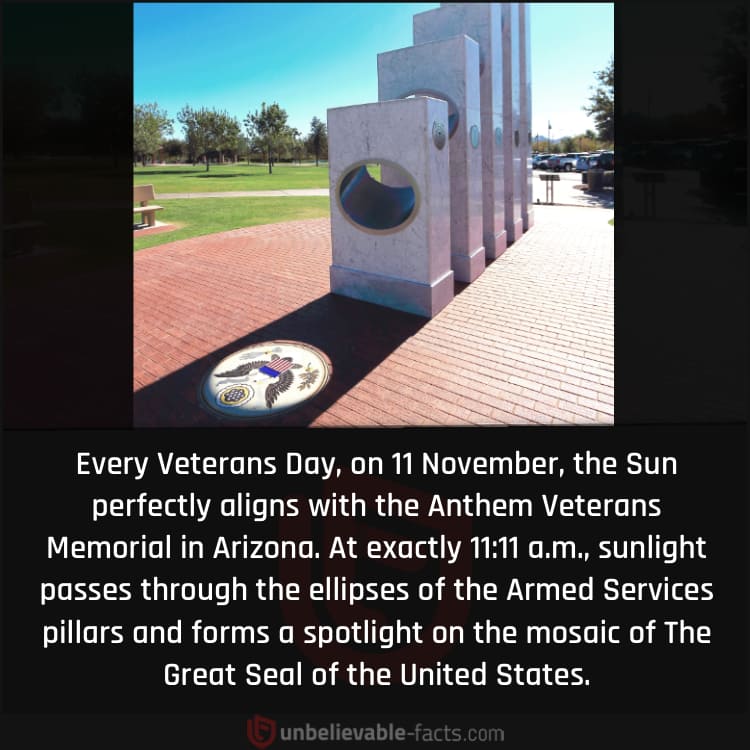 Every Veterans Day, on 11 November, the Sun perfectly aligns with the Anthem Veterans Memorial in Arizona. At exactly 11:11 a.m., sunlight passes through the ellipses of the Armed Services pillars and forms a spotlight on the mosaic of The Great Seal of the United States. 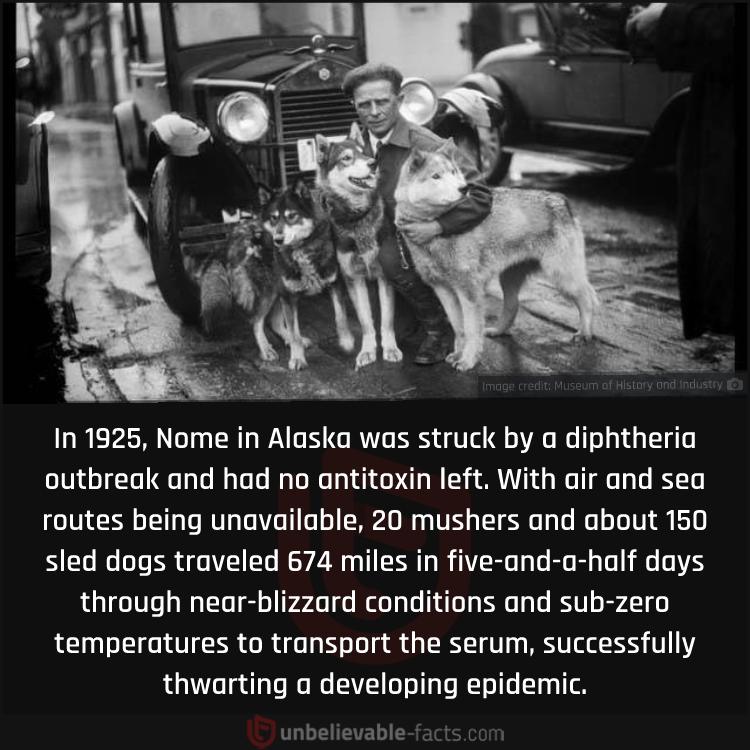 In 1925, Nome in Alaska was struck by a diphtheria outbreak and had no antitoxin left. With air and sea routes being unavailable, 20 mushers and about 150 sled dogs traveled 674 miles in five-and-a-half days through near-blizzard conditions and sub-zero temperatures to transport the serum, successfully thwarting a developing epidemic. 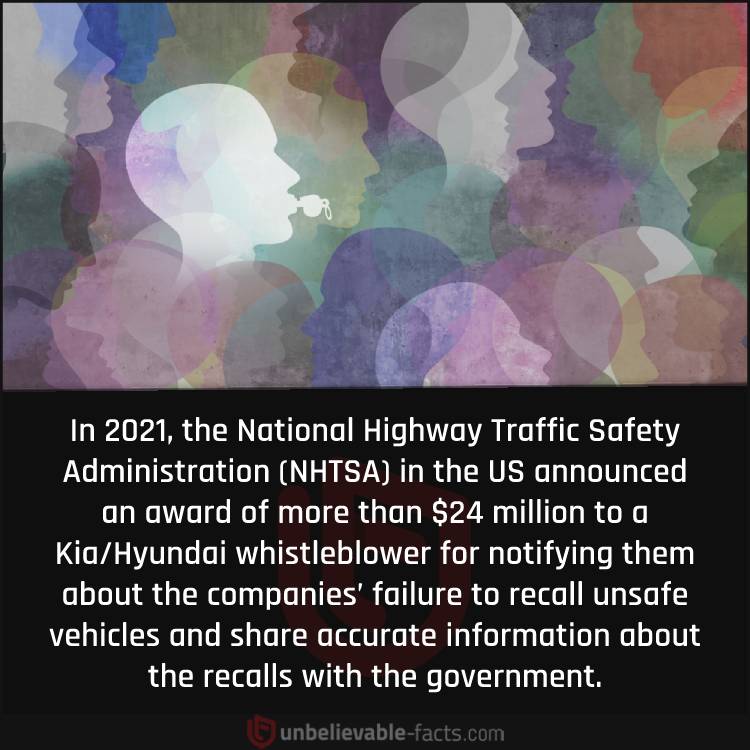 In 2021, the National Highway Traffic Safety Administration (NHTSA) in the US announced an award of more than $24 million to a Kia/Hyundai whistleblower for notifying them about the companies’ failure to recall unsafe vehicles and share accurate information about the recalls with the government. 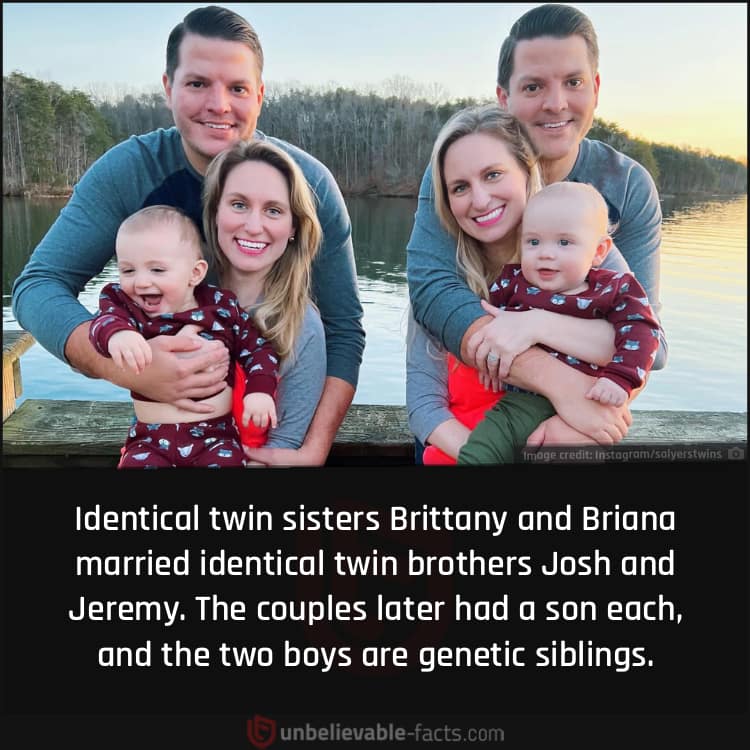 Identical twin sisters Brittany and Briana married identical twin brothers Josh and Jeremy. The couples later had a son each, and the two boys are genetic siblings. 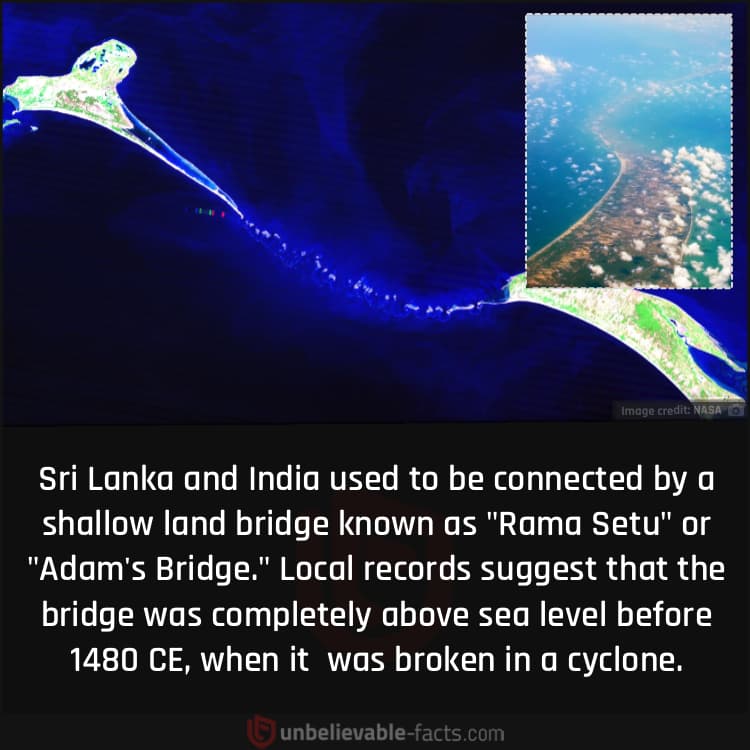 Sri Lanka and India used to be connected by a shallow land bridge known as “Rama Setu” or “Adam’s Bridge.” Local records suggest that the bridge was completely above sea level before 1480 CE, when it was broken in a cyclone. Every November, there is a day when people in South Korea maintain silence to help students concentrate on an extremely important exam. Planes are grounded, construction work is stopped, banks are closed, and even military training is ceased. This is the day of the Suneung exam. 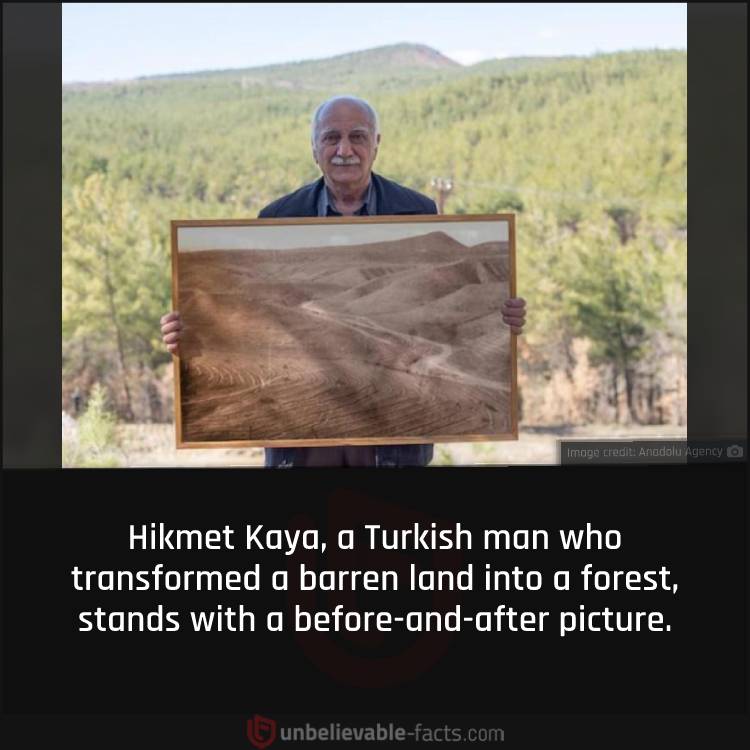 Hikmet Kaya, a Turkish man who transformed a barren land into a forest, stands with a before-and-after picture.

Also Read:
10 Most Successful Afforestation Efforts that Are Turning the Planet Green 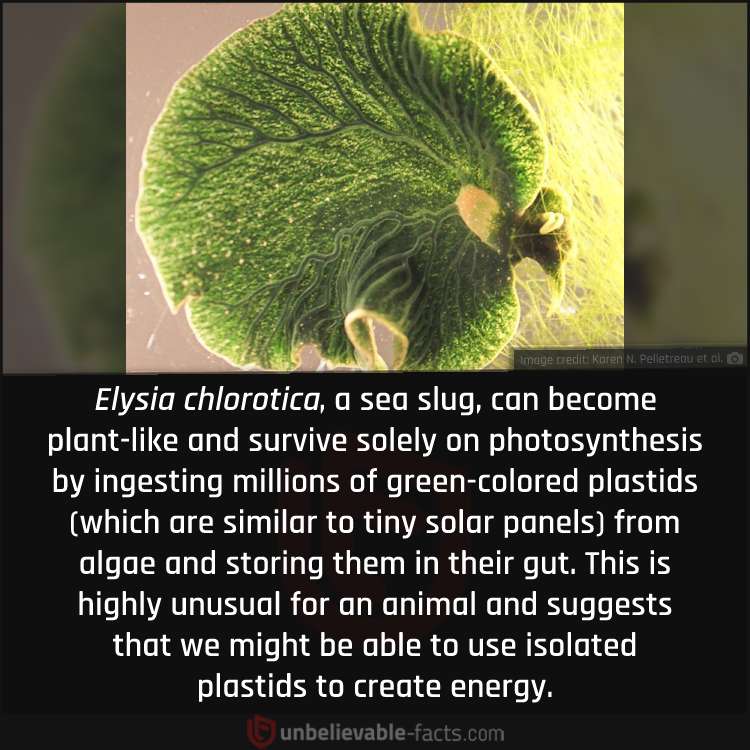 Elysia chlorotica, a sea slug, can become plant-like and survive solely on photosynthesis by ingesting millions of green-colored plastids (which are similar to tiny solar panels) from algae and storing them in their gut. This is highly unusual for an animal and suggests that we might be able to use isolated plastids to create energy.

16/101
Cigarette Butts Are the Most Littered Man-made Items. With roughly 4.5 trillion cigarette butts polluting the environment every year, they are the most littered man-made items. 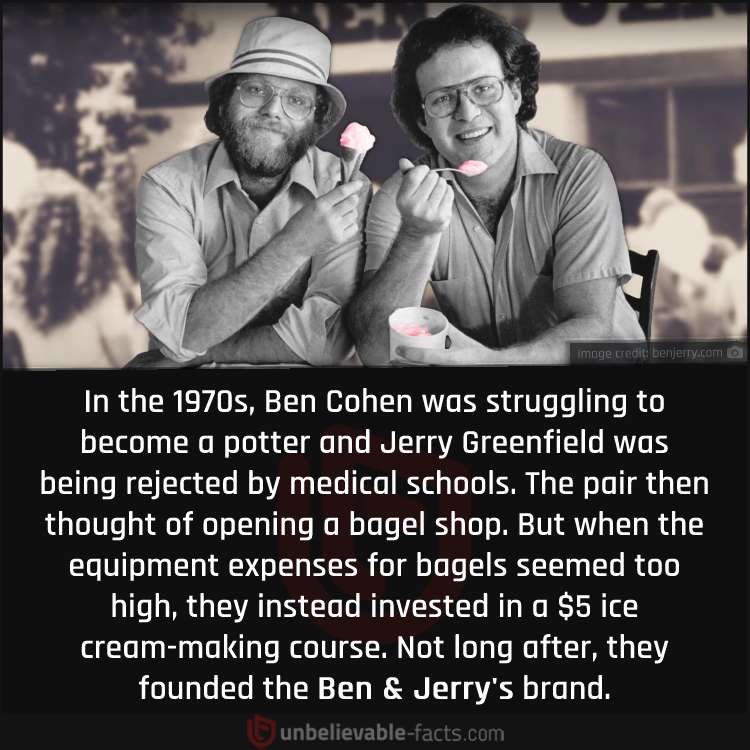 In the 1970s, Ben Cohen was struggling to become a potter and Jerry Greenfield was being rejected by medical schools. The pair then thought of opening a bagel shop. But when the equipment expenses for bagels seemed too high, they instead invested in a $5 ice cream-making course. Not long after, they founded the Ben & Jerry’s brand.

14/101
Drivers Must Leave an Open Emergency Lane in Germany 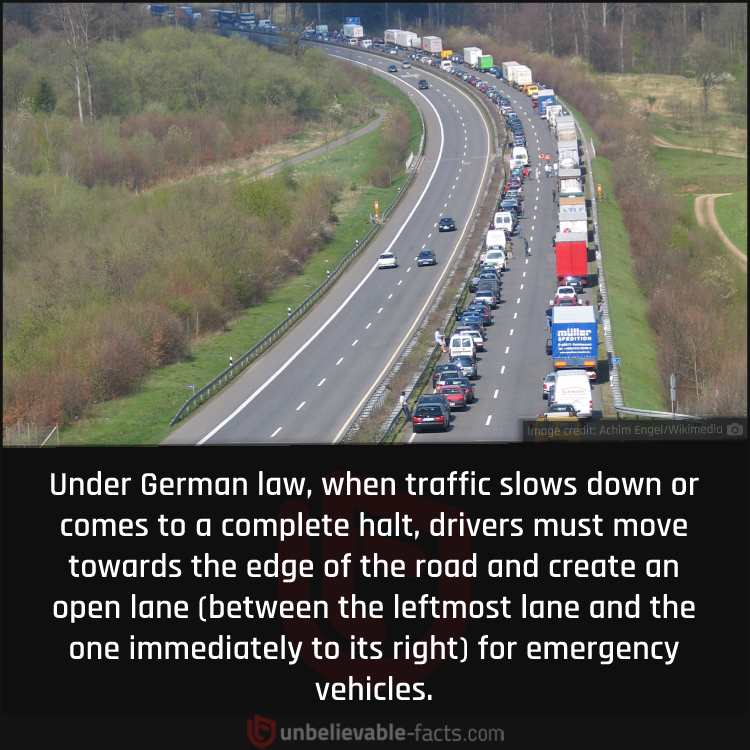 Under German law, when traffic slows down or comes to a complete halt, drivers must move towards the edge of the road and create an open lane (between the leftmost lane and the one immediately to its right) for emergency vehicles. 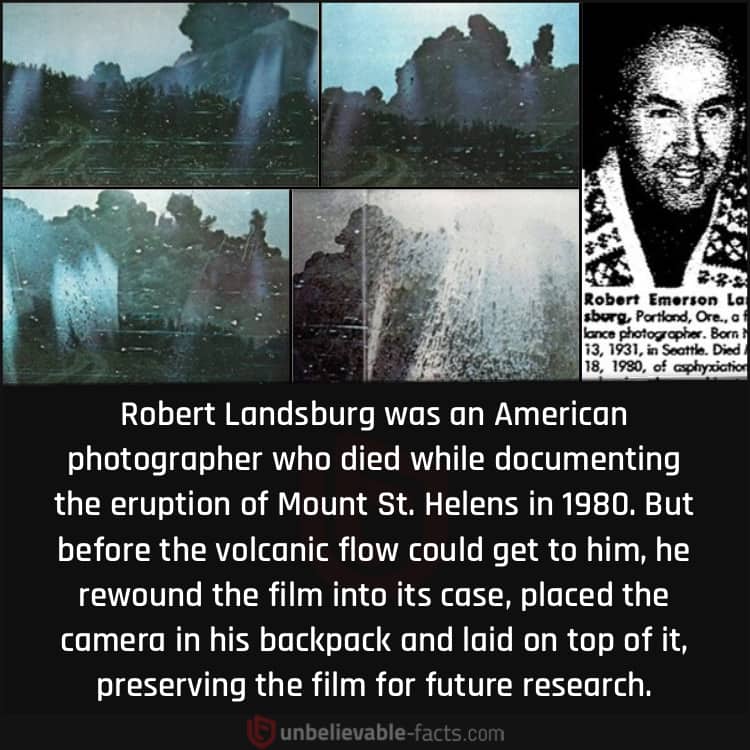 Robert Landsburg was an American photographer who died while documenting the eruption of Mount St. Helens in 1980. But before the volcanic flow could get to him, he rewound the film into its case, placed the camera in his backpack and laid on top of it, preserving the film for future research. 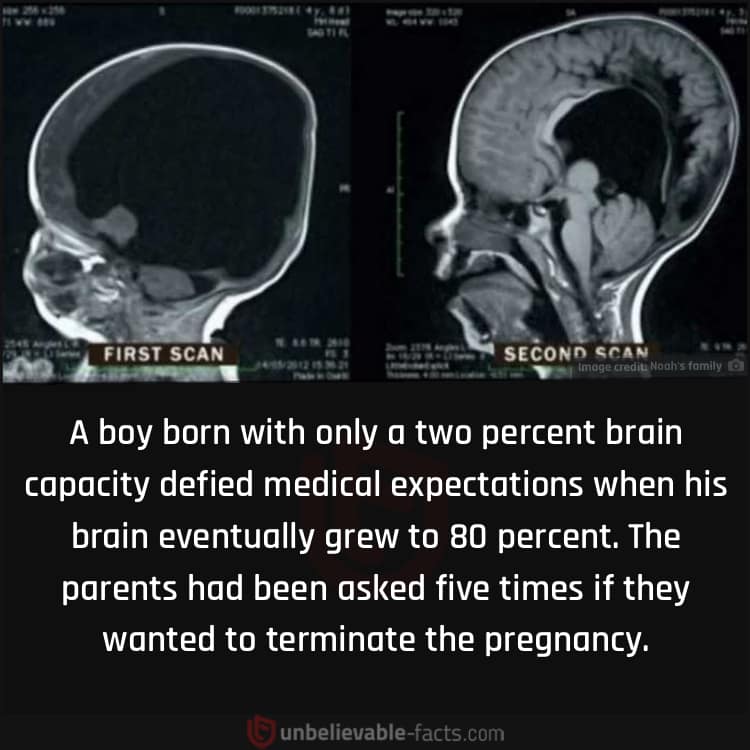 A boy born with only a two percent brain capacity defied medical expectations when his brain eventually grew to 80 percent. The parents had been asked five times if they wanted to terminate the pregnancy. 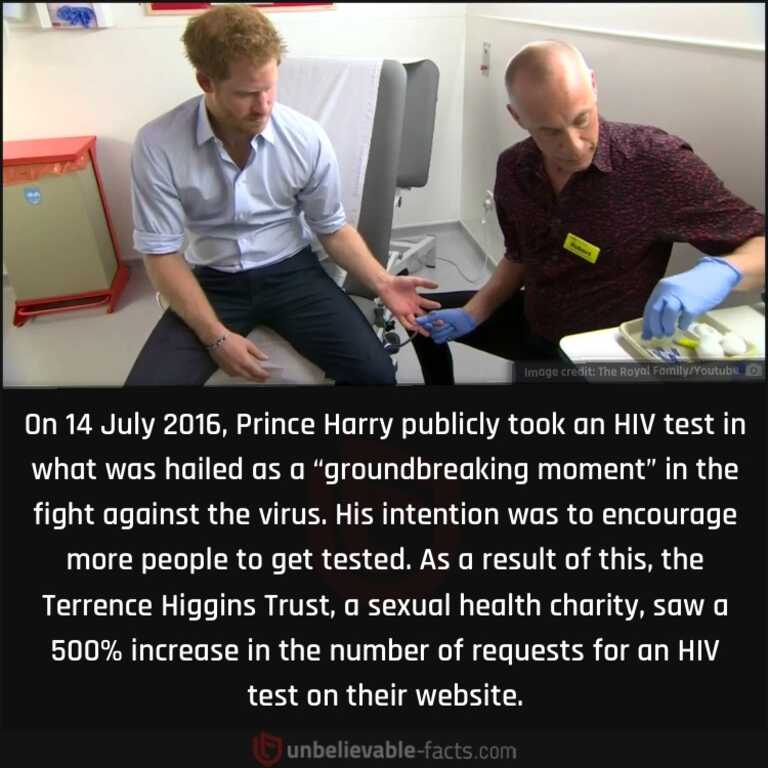 On 14 July 2016, Prince Harry publicly took an HIV test in what was hailed as a “groundbreaking moment” in the fight against the virus. His intention was to encourage more people to get tested. As a result of this, the Terrence Higgins Trust, a sexual health charity, saw a 500% increase in the number of requests for an HIV test on their website. 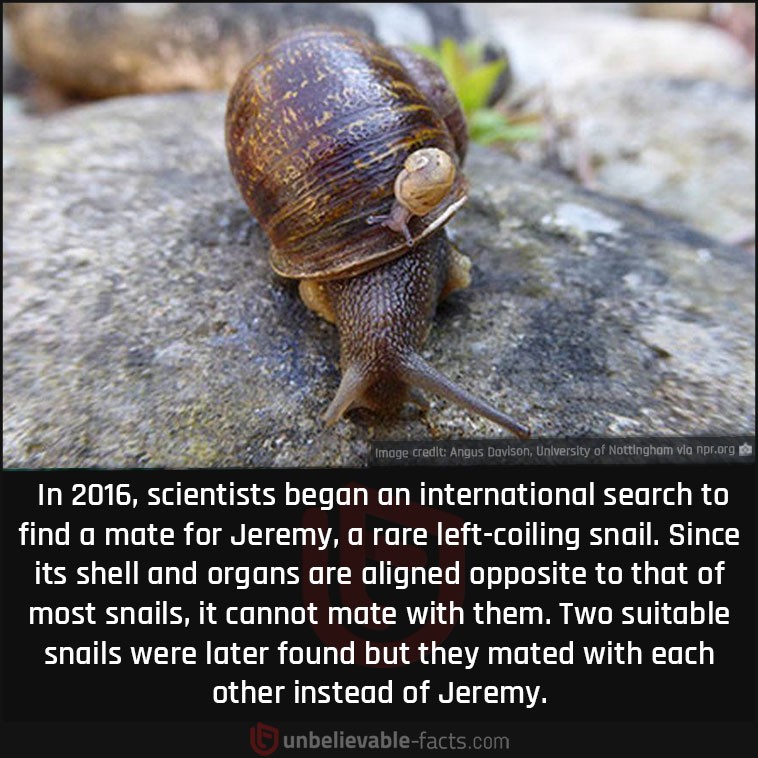 In 2016, scientists began an international search to find a mate for Jeremy, a rare left-coiling snail. Since its shell and organs are aligned opposite to that of most snails, it cannot mate with them. Two suitable snails were later found but they mated with each other instead of Jeremy. 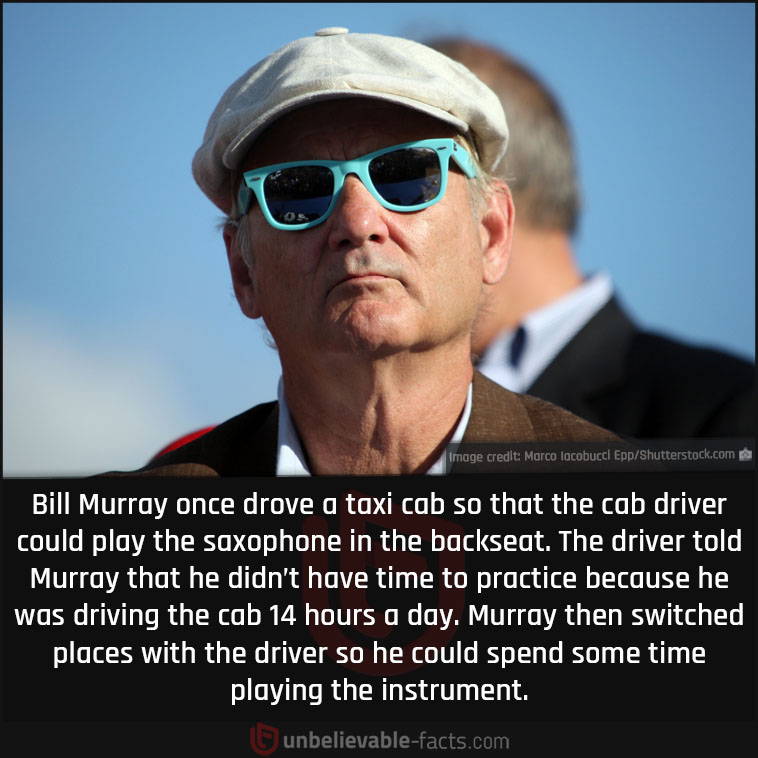 Bill Murray once drove a taxi cab so that the cab driver could play the saxophone in the backseat. The driver told Murray that he didn’t have time to practice because he was driving the cab 14 hours a day. Murray then switched places with the driver so he could spend some time playing the instrument. 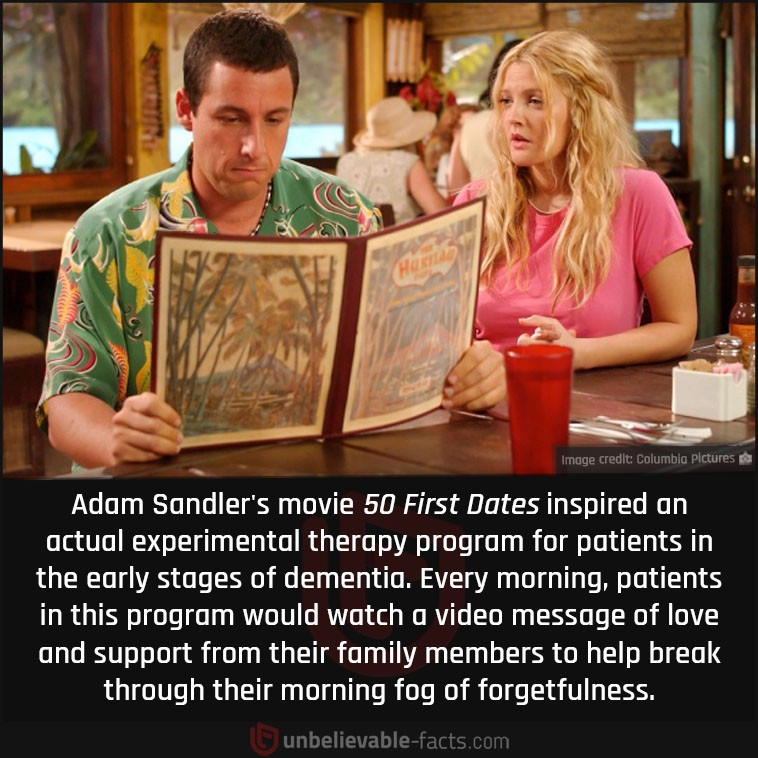 Adam Sandler’s movie 50 First Dates inspired an actual experimental therapy program for patients in the early stages of dementia. Every morning, patients in this program would watch a video message of love and support from their family members to help break through their morning fog of forgetfulness. 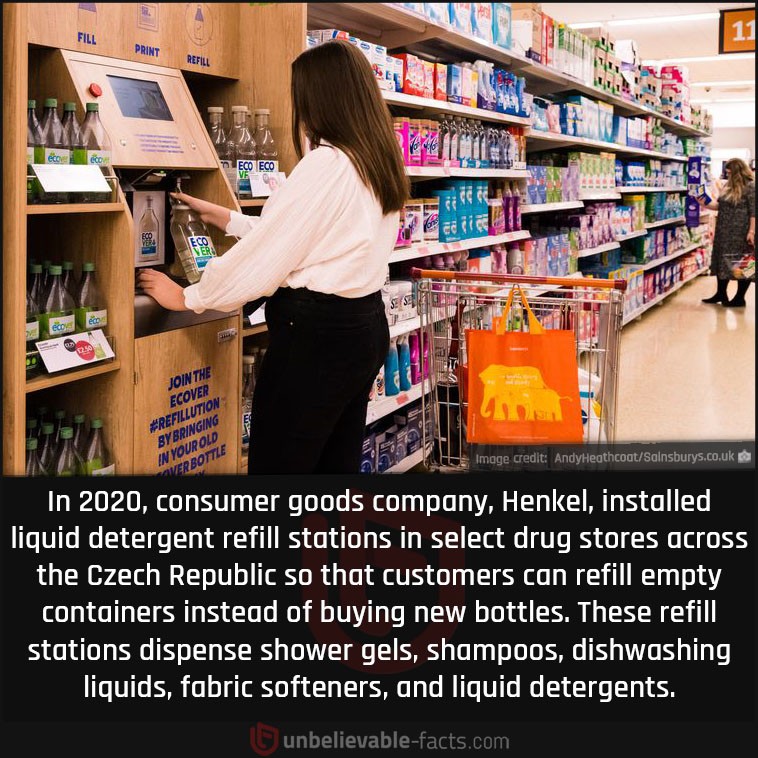 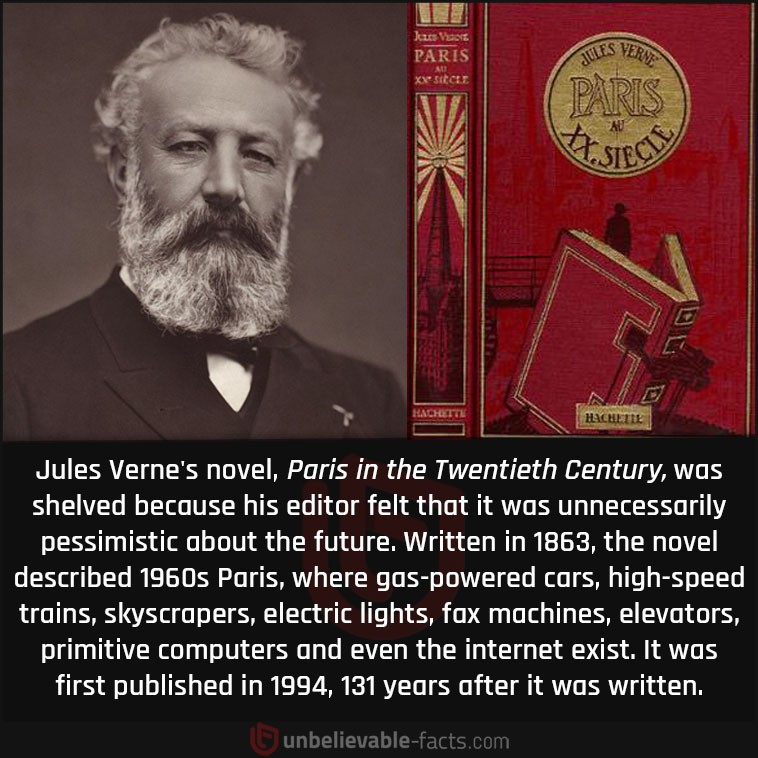 Jules Verne’s novel, Paris in the Twentieth Century, was shelved because his editor felt that it was unnecessarily pessimistic about the future. Written in 1863, the novel described 1960s Paris, where gas-powered cars, high-speed trains, skyscrapers, electric lights, fax machines, elevators, primitive computers and even the internet exist. It was first published in 1994, 131 years after it was written.

4/101
Daisuke Inoue, the inventor of karaoke 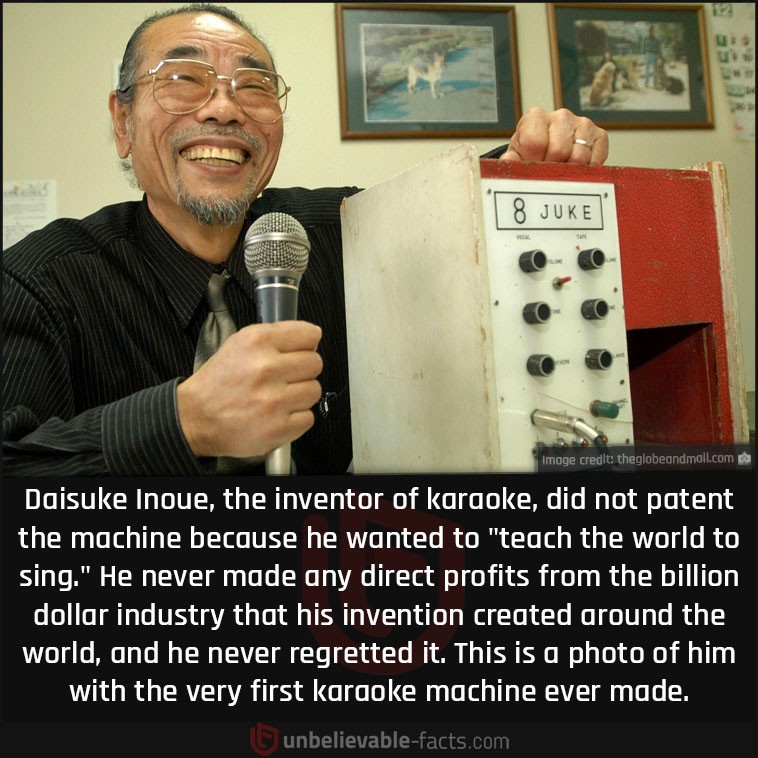 Daisuke Inoue, the inventor of karaoke, did not patent the machine because he wanted to “teach the world to sing.” He never made any direct profits from the billion dollar industry that his invention created around the world, and he never regretted it. This is a photo of him with the very first karaoke machine ever made.

3/101
Taylor Swift was born into wealth 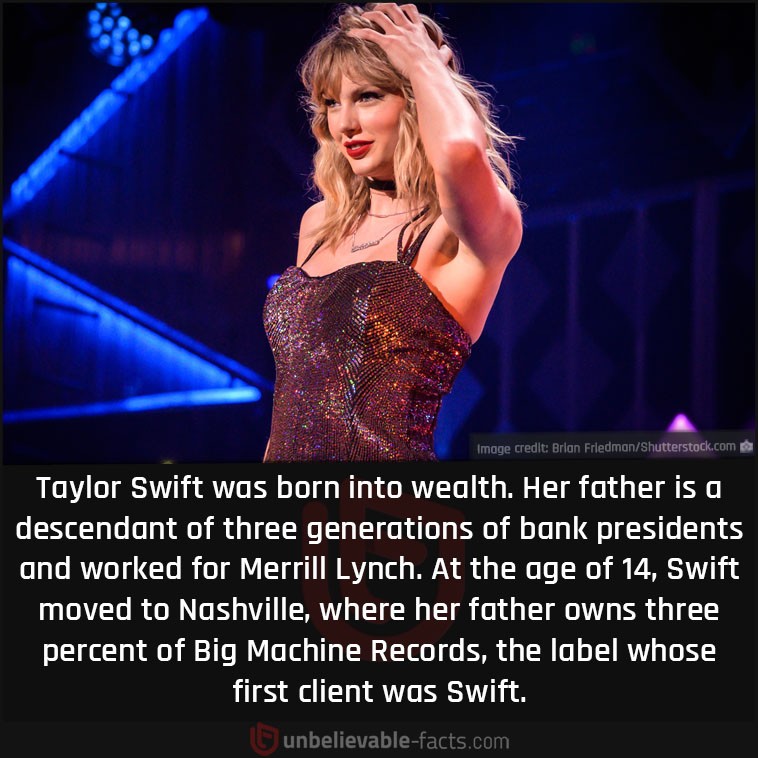 Taylor Swift was born into wealth. Her father is a descendant of three generations of bank presidents and worked for Merrill Lynch. At the age of 14, Swift moved to Nashville, where her father owns three percent of Big Machine Records, the label whose first client was Swift. 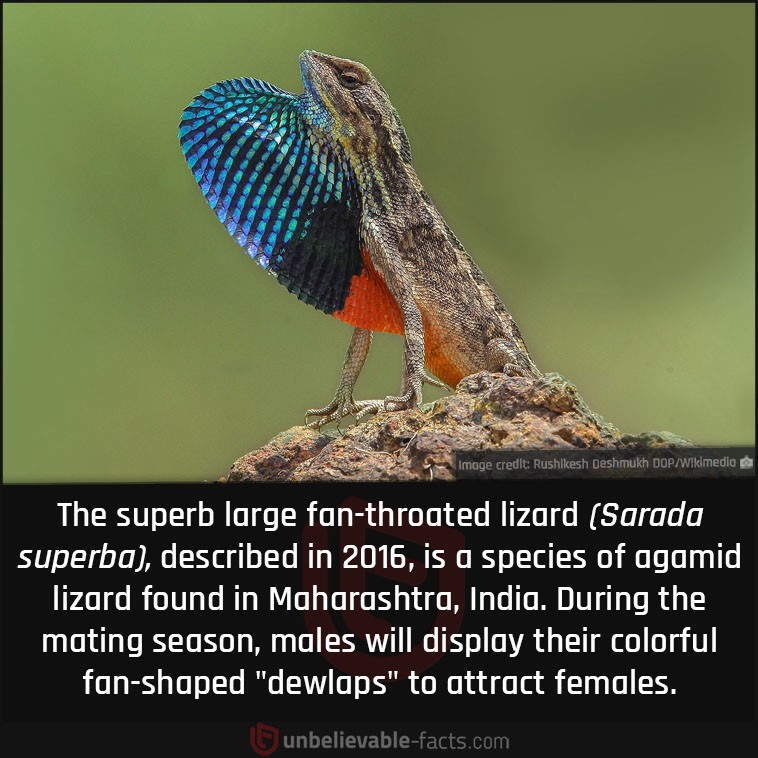 The superb large fan-throated lizard (Sarada superba), described in 2016, is a species of agamid lizard found in Maharashtra, India. During the mating season, males will display their colorful fan-shaped “dewlaps” to attract females. 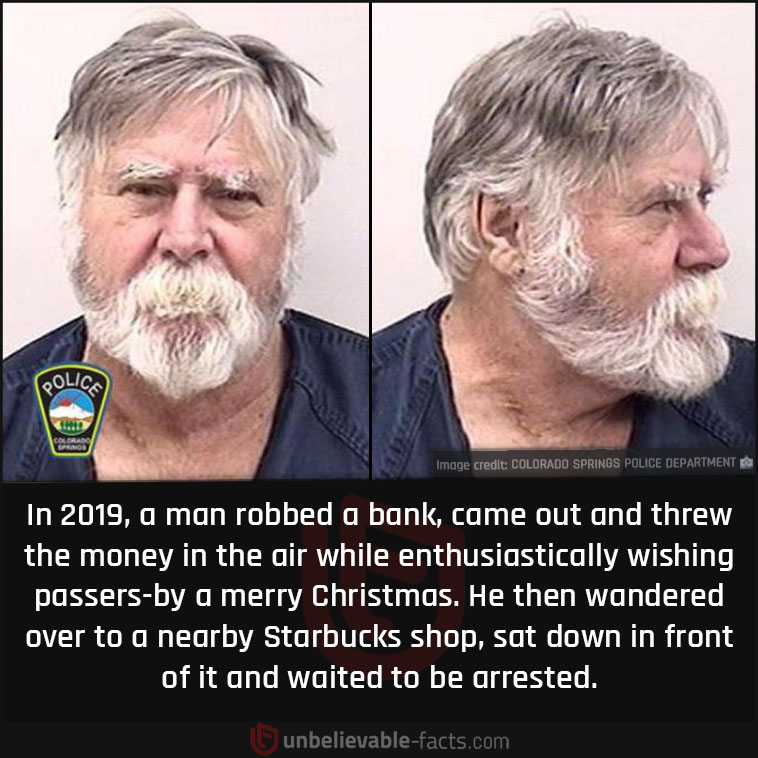 In 2019, a man robbed a bank, came out and threw the money in the air while enthusiastically wishing passers-by a merry Christmas. He then wandered over to a nearby Starbucks shop, sat down in front of it and waited to be arrested.

The Earth Pulses Every 26 Seconds, But Why?

15 Eye-opening Researches and Facts about Depression That Everyone Must Know!

10 Characters Played so well that they are Irreplaceable

10 of the Most Important but Uncommon Laws in the World

10 Remarkable Efforts of Ordinary People to Make the World Better

10 Surprising Things People Have Discovered in Their Homes

These Australian twin sisters speak simultaneously, wear the same clothes and think that they are one person