Scientists have detected a quiet, constant hum underneath the frigid, dusty surface of Mars. The strange sound, though inaudible to most humans, might be similar to the invasive and persistent low-frequency rumbling noise that can be heard throughout Earth. Although experts are unsure about what is causing the hum, it is just one of several mysterious discoveries made by NASA’s InSight lander. The details were released through five studies that were published in Nature Communications and Nature Geoscience. These studies also give us a glimpse into the surprising activities going on above and below the surface of Mars.

Shortly after landing on the red planet, the robot detected the sound and a range of seismic activity that could help scientists to figure out Mars’ internal structure and geologic activity. 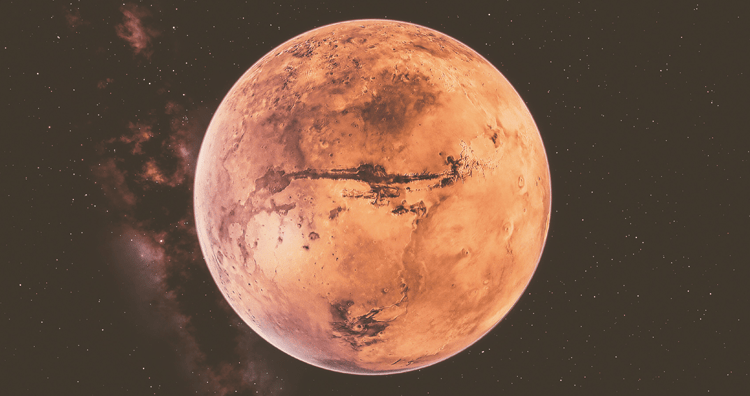 In November of 2018, after a harrowing descent, the InSight finally landed on a flat and featureless expanse close to the planet’s equator. Since then, using a highly sensitive seismometer and various other instruments, the robot has taken readings that will help scientists to understand Mars’ internal structure and geologic activity. Besides the hum, InSight has also discovered the first active fault zone along with pulses and patterns in the planet’s current magnetic field and hints to its magnetic past. All this data can help us figure out the process behind the formation and evolution of all rocky planets.

One of InSight’s main objectives is to study seismic activity on Mars, and so far, the lander has recorded over 450 marsquakes. The origin of these quakes is also a mystery.

The InSight lander was designed to measure seismic activities on the red planet. Though it was worryingly quiet during the first few months, the robot picked up the first-ever “marsquake” on April 6, 2019. Since then, it has recorded over 450 temblors, most of which are small but frequent events.

The experts are now trying to figure out where these marsquakes are coming from. The surface of the Earth frequently quivers because of the slow movement of tectonic plates. When enough stress generates in the crust, a sudden release creates a quake. However, since Mars does not have plate tectonics, geologists are looking at other possible explanations.

Two of the quakes detected by the lander have been particularly helpful in getting scientists closer to an answer. These temblors ranged between three and four magnitudes, which made it possible to track down the area where they originated. It turns out, the quakes occurred in an area called Cerberus Fossae, which is a series of deep, semi-parallel slashes that formed on the planet’s surface around 10 million years ago. Back then, floods of water and lava would burst out of these fissures and run down the surface. Scientists believe there may still be some fluid deep underground.

In that sense, the cooling and contracting of magma or the movement of water or molten rock through the subsurface could cause the rumbles. However, to pinpoint the exact cause, scientists will need to study a lot more marsquakes, even some reaching a magnitude five.

The Martian hum has puzzled scientists more than these quakes. Earth is filled with background noise, but the hum on Mars has a much higher frequency. So far, scientists think the constant drone is not related to wind, but it might be related to the geology of the planet.

The strange seismic signal that many are calling the Martian hum can be detected in the background of these quakes. On Earth, we are used to hearing various natural noises such as the sound of the ocean and waves crashing against the shore. However, most of these naturally occurring sounds have a frequency of less than 1 hertz. Contrary to that, the hum on Mars occurs at a much higher frequency of 2.4 hertz. Further analysis has suggested that the hum is unlikely to be caused by the roaring winds. However, marsquakes tend to make the noise stronger. Some experts have compared the phenomenon to the act of making a bell ring by shouting nearby.

The hum may also be caused by the geology of the planet. InSight is currently situated in a prehistoric crater, filled with sand and dust, and it may trap waves from these quakes and generate the noise. On the flip side, the lander is not excited by strong winds, and the basin it sits on may not be large enough to generate the hum. Some experts opine that the marsquakes and the hum may have separate sources, and the lander itself may be responsible. Though scientists currently do not have a solid explanation, they might have a better idea after studying more InSight data.

10 Famous People Who Lost Their Loved Ones To Unsolved Murders

15 of the Most Fascinating Sculptures in the World

Unbelievable Comparison Of Earth And Other Celestial bodies.

15 Unseen Pics And Facts About Andre the Giant That Will Make You Feel Very Small!

10 Myths that are Potentially Harmful to People if Relied Upon

10 Archaeological Discoveries from Recent Years that Will Leave You Amazed

Earth then and now: Spectacular transformation of Earth over the years caught by NASA