Nicknamed “The Colorblind Island,” Pingelap Atoll is Home to 250 Residents, 10% of Whom are Completely Colorblind

by Unbelievable Facts3 years ago4 min read
Related posts
18 Weird and Amazing Facts About Ancient Civilizations 3.7k views
6 Bioluminescent Organisms that Almost Look Unreal 708 views
10 Bizarre Abduction Cases that Will Shock You 2k views
Man, 25, Who Sold His Kidney to Buy an iPhone When He was 17 is Now Bedridden for Life 1k views
1.6k views

Nicknamed “The Colorblind Island,” Pingelap Atoll is Home to 250 Residents, 10% of Whom are Completely Colorblind

Imagine being surrounded by a colorful world but not being able to perceive it in its full glory. As sad as that sounds, this is a reality for people who are colorblind. Not everyone has the perfect color vision, but can you imagine an island where 10% of the population is genuinely and completely colorblind? Pingelap, a small atoll in the Pacific, has an unusually high number of colorblind residents. Moreover, it is not the typical colorblindness, one where you find it difficult to distinguish between red and green or blue and yellow. The residents of this tiny island can almost only see the world in black and white.

Pingelap atoll consists of three islands and covers a land area of 455 acres. It has its own language and a population of 250.

Situated in the Pacific Ocean, Pingelap Atoll is part of Pohnpei State. It consists of three islands, but Pingelap is the only one inhabited. The atoll covers a 455-acre land area, and the widest point is less than 4 km. Pingelap has a population of 250 and its own language called “Pingelapese.” Most of the island’s residents speak this native language. The island has a tropical climate, and it enjoys warm and even temperatures all through the year. Precipitation usually remains high, and the island receives heavy rainfall all year round.

The most notable aspect of the island is that 10% of its population is completely colorblind, and that is a result of a violent storm that took place in 1775. 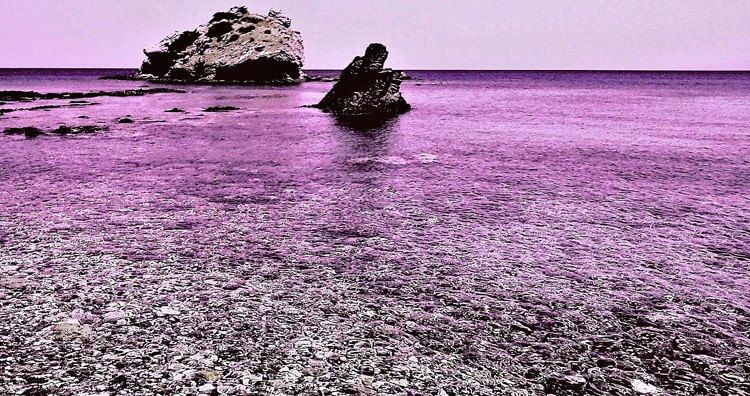 In 1775, a deadly typhoon called “Lengkieki” ravaged Pingelap and killed most of the islanders. After the storm and the famine that followed, the island had a population of only 20. One of the survivors, who was also a ruler at the time, is thought to have been the carrier of the gene that is now known as “CNGB3.” This gene resides in Chromosome 8 and is responsible for one of the most common forms of rod monochromatism. This recessive genetic disorder is known for causing total color blindness or complete achromatopsia.

It is believed that cultural and geographic isolationism led to generations of inbreeding among the survivors who repopulated the island. Interestingly, the carrier of the gene did not have the disorder. Being an autosomal recessive disorder, achromatopsia is likely to occur as a result of recessive allele frequency. That is why the signs of achromatopsia did not show up until the fourth generation that came after the typhoon. By the sixth generation, 4.9% of the population had the disorder.

The colorblindness occurred as a result of inbreeding and the “founder effect,” which is why all the colorblind people of the island can trace their ancestry back to the ruler who originally had the CNGB3 gene. Moreover, people who have this disorder have trouble seeing in sunlight. However, their night vision is much stronger than people who do not have achromatopsia, and they can easily spot faint light.

The CNGB3 gene was first identified in 2000 by a team of researchers at John Hopkins University School of Medicine. Pingelap Atoll continues to fascinate geneticists.

After over 30 years of research into Pingelap and its colorblind population, scientists were finally able to find the answer in the year 2000. Geneticists Irene Hussels Maumenee and Olof Sundin of the Johns Hopkins University School of Medicine tested the DNA of 32 islanders, only 50% of whom were colorblind. After several tests and studies, they were finally able to track the gene responsible for the condition. Their report was published in Nature Genetics.

To this day, Pingelap Atoll is a topic of interest among geneticists around the world. The combination of a small gene pool and rapid growth in population has made achromatopsia unusually common on the island. Nearly 10% of the island’s population is colorblind. In the United States, only 0.003% or 1 in 33,000 people are colorblind.

England’s Poison Garden, the Deadliest Garden in the World, Contains Around 100 Species of Poisonous and Intoxicating Plants

The Georgia Guidestones Are Monoliths that Function as a Clock, Calendar, and Compass, and Provide Instructions in Eight Languages on Rebuilding Society

10 Dictators Who Were Surprisingly Good

Why Can’t We Simply Eradicate Mosquitoes?

10 A**hole Facts That Will Ruin The Fun For Everyone

15 Incredible Life-Saving Facts That Everyone Should Know!