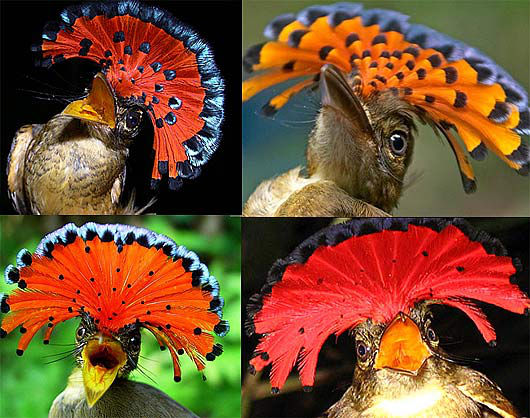 The Amazonian Royal Flycatcher is found in forests and woodlands throughout most of the Amazon basin.  They are about 6 1/2 inches in length and like to dart out from branches to catch flying insects or pluck them from leaves.  They build very large nests (sometimes up to 6 feet long) on a branches near water. The nest hangs over the water which makes it hard for predators to reach.(Image source: factzo.com)

Let’s Get A Little Creepy.. 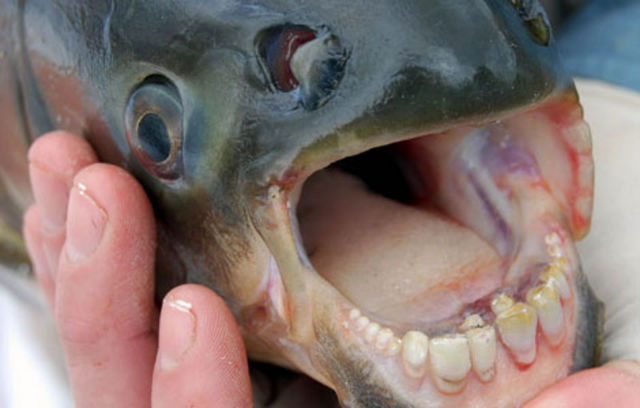 Pacu is a common name used to refer to several common species of omnivorous South American freshwater fish that are related to the piranha. Pacu and piranha don’t have similar teeth, although the main difference is jaw alignment; piranha have pointed, razor-sharp teeth in a pronounced underbite, whereas pacu have squarer, straighter teeth, like a human, and a less severe underbite, or a slight overbite. Additionally, full-grown pacu are much larger than piranha, reaching up to 0.9 m (3 feet) and 25 kg (55 pounds) in the wild.(Image credit: Julia Dorn/Courtesy National Geographic Channel) 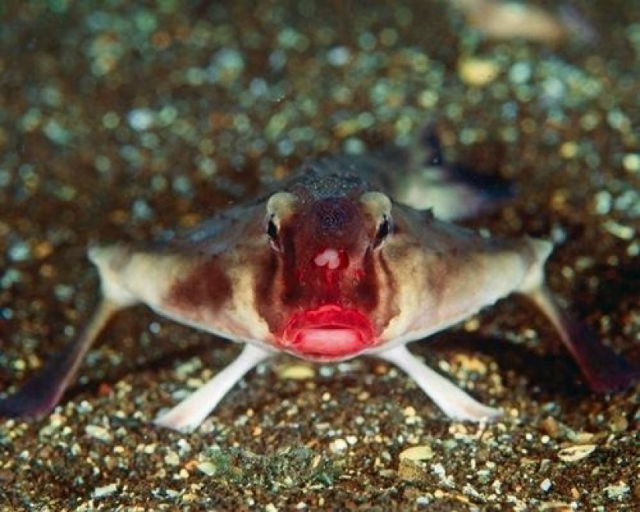 The red-lipped batfish gives the impression that it tried to compensate for an unusual body by caking on the lipstick.
Interestingly, they are better suited for ‘walking’ along the ocean floor than swimming. When they reach adulthood, they use their dorsal fin as a fishing lure to attract prey instead of for swimming.(Image credit: ZUMA Press) 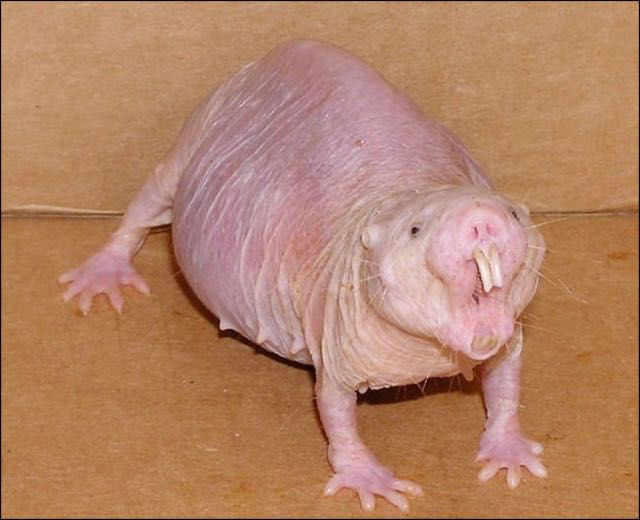 This creature has a lot of characteristics that make it very important to human beings.  For one it is resistant to cancer.  They also live up to 28 years, which is unheard of in mammals of its size.  It seemingly does not age much in those 28 years either.  It remains “young, healthy and fully fertile for almost all its days, which for an elderly animal is equivalent to an 80-year-old woman having the biological make-up of someone 50 years younger.”  The naked mole rat is used in both cancer research and the study of aging.  Not only making it a bizarre creature, but an incredibly important creature as well.(Image credit: Buffenstein/Barshop institute/UTHSCSA)

..still not enough? these will definitely creeps you out.. 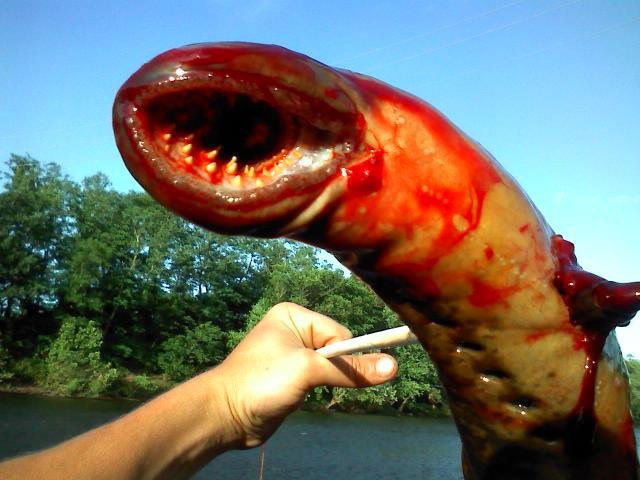 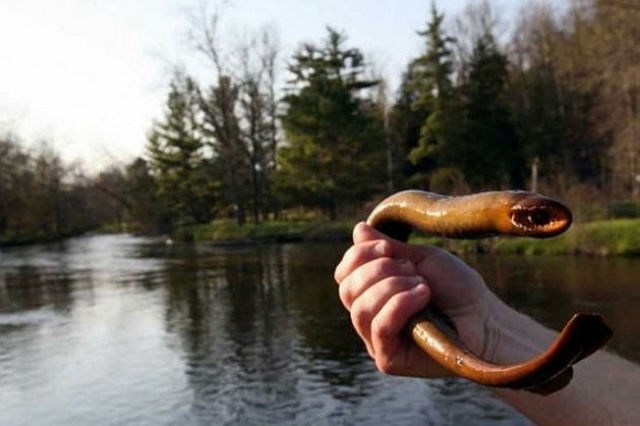 Lampreys are a type of jawless fish that live mostly in coastal and fresh waters whose adults are characterized by a toothed, funnel-like sucking mouth.  They attach themselves to fish and suck their blood.  Lampreys have been around for nearly 300 millions years and their body structure has remained relatively unchanged.(Image source: Reddit user jlitch)

The star-nosed mole is a small mole found in wet low areas of eastern Canada and the northeastern United States. It is easily identified by the 11 pairs of pink fleshy appendages ringing its snout, which is used as a touch organ with more than 25,000 minute sensory receptors, known as Eimer’s organs, with which this hamster-sized mole feels its way around.(Image source: synapsebristol.blogspot.in)

You would be surprised to know that the aye-aye has the ability to extract food from the tree trunks using their fingers. This is a very unique feature of the animal. They tap on the trees few times and based on the echo that is produced make holes inside using their teeth. Once they have made the hole in the tree, the food is taken out using their fingers. 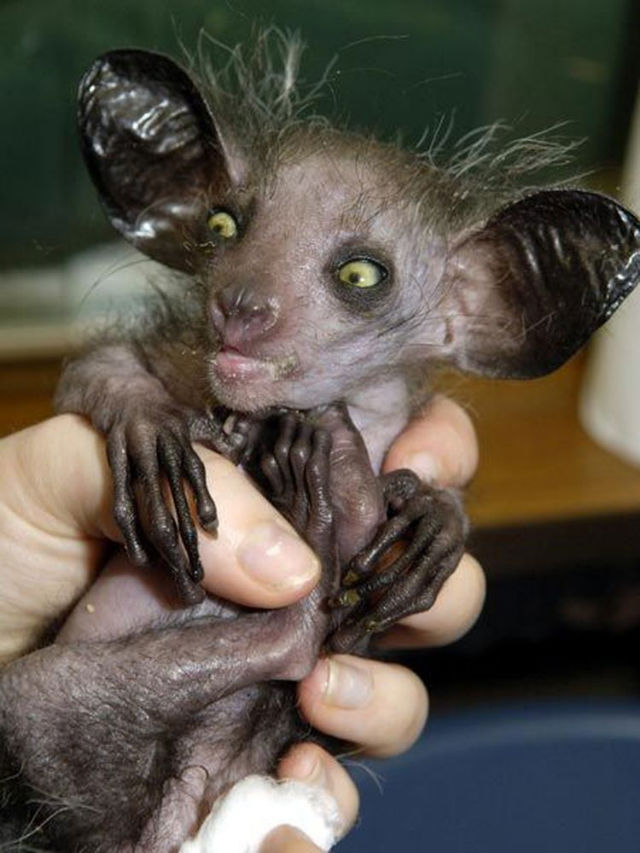 They usually search for their foods during the night time. They like to take occasional breaks in between their work. The aye-aye has the ability to climb trees through vertical leaps that can be done successively. You would be shocked to find out that the aye-aye can cross up to 4 kilometers per night.(Image source: animalsadda.com)