Victoria’s Secret Unveils the First Model with Down Syndrome

by Amala Suman2 months ago7 min read
Related posts
15 Most Adorable Miniature Animals In The World 59.8k views
Planets Replacing The Moon!!! Imagine… 2.4k views
Christmas 1914: When British And German Soldiers Laid Down Their Guns For A Moment Of Peace 13.8k views
15 Bizarre Facts That Will Change The Way You See The World! 2.1k views
40k views

Victoria’s Secret Unveils the First Model with Down Syndrome

Victoria’s Secret is a well-known brand that has always featured unique models from across the globe to promote its collections. This time, Sofia Jirau, 25 years old, made history in the world of fashion when she signed on as the first Down Syndrome model for Victoria’s Secret. Today, we are going to learn more about this aspiring businesswoman who wants to revolutionize the fashion industry.

Sofia Jiaru, Who is She?

Sofia Isabel Jirau González was born in Puerto Rico to Mimi Gonzalez and Frankie Jirau in 1996. She is one of four children in the family, the second oldest. She was born with Down Syndrome, which is a genetic disorder caused when abnormal cell division results in extra genetic material from chromosome 21.

Down Syndrome usually causes a distinct facial appearance and other developmental delays. However, this never stopped Sofia from being determined to achieve her goals. Sofia was five years old when she decided she wanted to be a model and business owner. And that’s precisely what she has accomplished today!

With the fear of facing failure, many people renounce their creative aspirations, but Sofia Jirau is an exception. This Puerto Rican girl is now a recognized model and an established entrepreneur following her dreams with conscientiousness and tenacity.

In 2012, Sofia bagged her first modeling opportunity at Wanda Beauchamp’s fashion show. However, she formally began her “professional” modeling career on March 26, 2019, when she turned 23. She later posed for various eminent fashion houses through her 20s.

In Feb 2020, she made her New York Fashion Week debut in the Marisa Santiago show. The event was covered by numerous reputable media outlets, including Vogue Mexico, People, and Univision. This opportunity helped her grow in her modeling career tremendously.

Apparently, Sofia Jirau announced in February 2022 that she had been endorsed as the first Down Syndrome Model for Victoria’s Secret. She also shared a post about it on her Instagram handle. “I used to dream of it, and now my dream has come true after working for it. Finally, I can reveal my big secret to you,” Sofia wrote. “I am the first model with Down Syndrome to work for Victoria’s Secret.”

The newest campaign from Victoria’s Secret, called “Love Cloud,” brings people from different environments under one framework. When Sofia received a hiring call from Victoria’s Secret to feature in this campaign, she felt flabbergasted and ecstatic. She flew to Los Angeles to shoot for Love Cloud Campaign and joined Miriam Blanco, a young woman in a wheelchair, Jailyn Matthews, a fitness instructor, and Celilo Miles, a firefighter in Idaho, and others to promote the new line of clothing collection.

The model expressed her gratitude to the brand for including her in the initiative to promote diversity; she is only the second Puerto Rican model to work with Victoria’s Secret. Thus, showing the world that “inside and out, there are no limits!”

The campaign also stars Adut Akesh, Hailey Baldwin, and Valentina Sampaio. The creative director, Raúl Martinez, explained that these campaigns are reflecting the brand’s evolution as it continues to be more accepting of incredible men and women who bring the collections to life. The company is also planning to dismantle its longstanding “Angel” title, as it does not fit the narrative of accommodating an ever-growing group of accomplished people with a common passion in order to drive positive change.

While Sofia relishes her success, she stated that this experience had changed her life, and she can inspire others and appreciate them to pursue their goals in a similar manner. So far, Victoria’s Secret has been her biggest accomplishment since debuting on New York Fashion Week in 2020. However, she believes this is just the beginning. Her next aspiration is to model in Paris and Italy.

Sofia was hired as an experienced ambassador by INprense, a business in Puerto Rico that encourages entrepreneurship in a variety of fields through training and innovative thinking. The business supported Sofia in launching her brand called “Alavett” based on her favorite phrase, “I love it.” The brand features daily accessories like coffee mugs, phone covers, T-shirts, pillowcases, etc., that are personally designed by Sofia. She said, “Alavett is my cry of joy to this world,” as she is living her entrepreneurial dream through her venture.

Keeping aside her business and modeling endeavors, Sofa Jirau has also launched a campaign called “Sin Limites” (No Limits) to promote awareness of Down Syndrome and its community. You can access the drive at sinlimites. Sofia dispels misconceptions about the condition, shares stories of others who have it, and offers resources on this website. She wants everyone to know that there are no limitations for people who have her condition. And that, like everyone else, they are capable of achieving their dreams. In an interview, Sophia said, “Like me, people with Down Syndrome are capable of finding employment, starting their businesses, and putting in a lot of effort.”

The Inclusive Approach in the Modeling World

It is a well-known fact that entertainment industries discriminate against people’s body types and colors. Especially when something does not perfectly fit the socially constructed beauty standards. Although this concept was once seen as a unique perspective to filter deserving enthusiasts, it is now seen as an attempt to exclude passionate aspirants. Even so, recent years appear to have changed stupendously, and the modeling industry now takes an inclusive stance.

All global brands have started to employ various individuals to work as their spokespersons. The recent campaign, Love Cloud from Victoria’s Secret, is a pivotal point in the brand’s advancement to showcase the standard that is developing an inclusive spirit. The lingerie brand is now welcoming, celebrating, and supporting all humans, irrespective of their color, race, nationality, and/or disabilities. We could definitely say that a new era of inclusivity in the modeling industry is emerging by promoting unrealistic beauty standards.

Thanks to individuals like Sofia Jirau for not giving up! 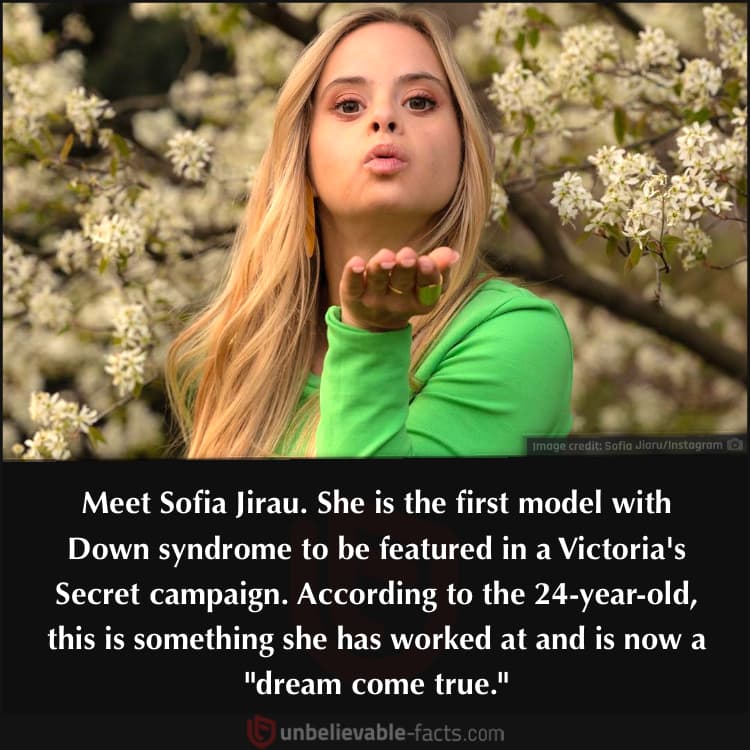 Meet Kefir, the Huge Maine Coon Who’s Way too Big to Be a Cat

10 of the Most Useful Websites for Students

These 25 Vintage Photos Captures The Creepiest Moments From The Past

10 of the Strangest Yet Fascinating Animal Evolutions

10 People Who Literally Died From Laughing Too Hard