Who Was the Leatherman, the Mysterious Nomad of the 1800s?

Who Was the Leatherman, the Mysterious Nomad of the 1800s?

In the 19th century, a nomadic figure known only as the “Leatherman” became a celebrity in the northeast of America. His clockwork-like comings and goings across New York and Connecticut were greatly anticipated by many. But though many people knew him, the identity and history of this leather-clad vagrant is a mystery that continues centuries later.

The life of the Leatherman

Between the years 1857 to 1889, a vagabond known as the “Leatherman” traveled through the Connecticut and New York countryside. At first, his travels were seemingly random. But he eventually settled into walking a continuous clockwise 365-mile-loop between the Hudson River and Connecticut Rivers, a route that the Leatherman continued upon all 365 days a year.

Reports indicate that the Leatherman walked over 10 miles each day. And his route generally took around 32-34 days to complete. Indeed, his traveling was so consistent that locals could predict when they would see him in the area next. In anticipation, they regularly cooked meals for him, which he, a man with an understandably hearty appetite, would politely accept. The locals would also give him tobacco and leather scraps, but he seldom accepted money or shelter.

The Leatherman gained his moniker due to his suit made of old boot tops sewn together with leather lace. Most presume that he stitched this suit himself, which weighed around 60-70 pounds, and he wore it all year round. Such clothing likely came in handy during cold nights since the Leatherman almost always slept in caves and rock outcrops.

Who was he, and where did he come from?

Despite, or perhaps thanks to, his peculiar nature, the Leatherman became a celebrity. Some schools even let students go outside to give him food when he passed on “Leatherman Day.” And although Connecticut passed a “tramp law” in 1879 (which permitted the arresting and jailing of vagrants), there exists no record of anyone arresting him. That is, bar one time in 1888, which was in concern for his health.

But although many knew of and met the Leatherman, no one knew who he was, where he came from, or why the Leatherman lived the way he did. He did not talk much, and when he did, he did so in either broken English or French, presumably his native language.

With little to go on, people soon began creating origin stories for him. One account suggested that he was Jules Bourglay of Lyons, France. As the tale goes, he had abandoned his homeland after a failed excursion into the leather trade. His failure, in turn, ended his romance with his employer’s (a local leather merchant) daughter, a woman named Margeret Laron. Broken-hearted and downtrodden, Bourglay began walking in solitude across America clothed in the “substance of his ruin.” This story was later proved false but remained a popular tale, nonetheless.

The death and (failed) exhuming of the Leatherman

The Leatherman was found dead in one of his New York shelters in March 1889. Some accounts place his death as the result of a head injury, others that he had cancer for which he refused treatment. In any case, locals laid him to rest in Ossining’s Sparta Cemetery.

Many years later, in 2011, officials decided to relocate his grave due to its proximity to Route Nine and the danger this presented to visitors. At the same time, the Ossining Historical Society won the right to inspect his remains and arrange DNA testing. The hope was that the testing would shed more light on his origins and test whether he had autism, as some claimed.

The project wasn’t without controversy, and a local history teacher, Don Johnson, who set up a site called “Leave the Leather Man Alone,” campaigned against it. Johnson argued that Leatherman was intensely private in life and that this should be respected in death. However, it wouldn’t matter much in the end anyway. When historians dug up Leatherman’s grave, all they found were coffin nails. The Leatherman had seemingly vanished.

Experts put the disappearance down to the impact of traffic and a nearby road-grading project. In any case, it seems that for now, the Leatherman will remain as mysterious in death as he was in life.

With nothing to rebury, the nails and some soil from the original grave were placed in a new coffin and laid to rest on the cemetery hillside, away from the road. The original grave marker, which wrongly read “Jules Bourglay,” went to a museum. Perhaps fittingly, the current grave marker is a boulder bearing a plaque that reads only “The Leatherman.”

The Leatherman in popular culture

The Leatherman has become something of a folklore legend, one which has been told and retold over generations. His legacy has inspired many filmmakers, musicians, writers, and others.

Perhaps the most notable pop cultural artifact inspired by the Leatherman is the song of the same name by the grunge rock band Pearl Jam. The track playfully recounted the story and served as a B-side of the 1998 single “Leatherman” from the album Yield.

Finnish singer-songwriter J. Karjalainen is another artist seemingly influenced by the story of the Leatherman. Their song “Mennyt mies” makes a reference to a “Uuden-Englannin nahkamies,” which translates to English as “New England Leatherman.”

The Leatherman has also been the subject of several books and television documentaries. And there’s even a race in Pound Ridge, N.Y. (The Leatherman Loop) named after him and inspired by his travels.

The mystery and the legend continue

We may never know who exactly the Leatherman was. But many continue to hunt for clues and speculate on the mysteries surrounding his identity, life, and death.

Dan DeLuca, author of The Old Leather Man: Historical Accounts of a Connecticut and New York Legend, is one of many who became fascinated with the story. And after over twenty years of research, he concluded that the Leatherman was likely part French-Canadian and native Indian. DeLuca believes that he may have been raised by an Indian grandfather who taught him survival skills, but he also laments that he cannot substantially prove these suspicions.

DeLuca noted that the Leatherman’s prompt and regular traveling and routines might indicate an obsessive-compulsive disorder, but he also states that his route likely grew out of the necessity to feed himself as he became less self-dependent.

When asked during an interview why the Leatherman lived the way he did in the first place, DeLuca replied, “Why do we do what we do? This was his way of life, and he was surviving.”

Also Read:
10 Mysteries from the Past that Were Solved in Recent Times 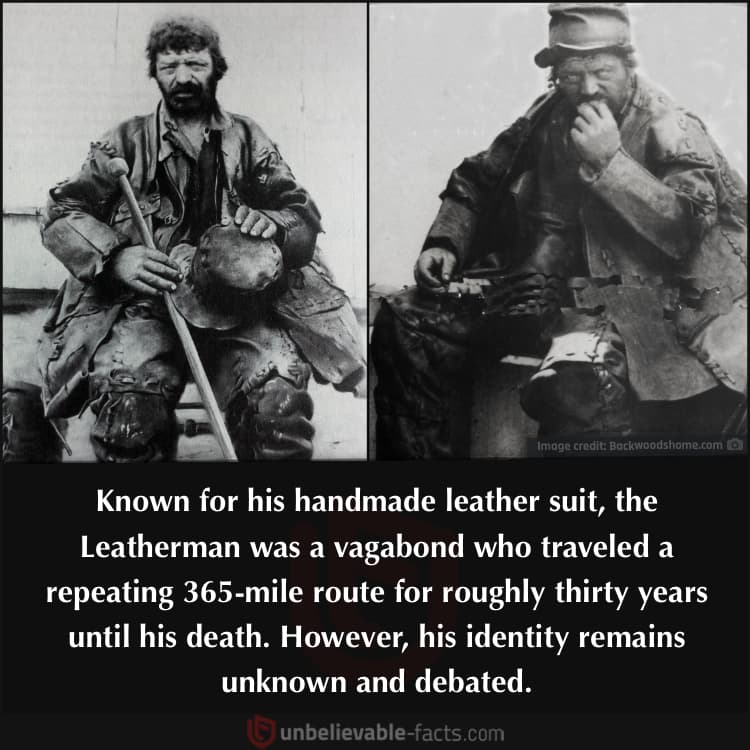 Why Do Cats Fear Cucumbers?

Samantha Ramsdell Has the Largest Mouth in the World

10 Mysteries that Even Science Can’t Explain!

The Great Pyramid of Giza, the Last Remaining of the Seven Wonders of the Ancient World

This Looks Like A Normal Restaurant, But Once Inside, The Truth Will Amaze You

The Flourishing Wildlife of Chernobyl Despite High Levels of Radiation

10 Statistics that Sound Exaggerated but Are 100% True