by Dulumoni Das3 years ago7 min read
Related posts
10 People Who Faked Their Own Kidnapping for Shocking Reasons 1.4k views
He Was 16 When Nagasaki Was Bombed; These Photos Of Nagasaki Survivor Will Shock You To Your Very Core. 1.2k views
Can Anyone Ever Imagine The Movement Of A Vehicle Up A Steep Mountain, With Its Ignition Off? Welcome To Magnetic Hill Leh-Ladakh 2.1k views
12 Astounding Facts About Food Not Many People Know About 40.2k views
1.1k views

Oradour-sur-Glane is one of the most important places of tourist interest in Europe, not for its culture or beauty but for its gory past. Once an idyllic French commune, Oradour is little more than a ghost village today. What went wrong here? Well, in an unexplained act of barbarity, German soldiers destroyed the entire village. Civilians were either burnt alive or shot, and the massive fires that broke out engulfed all Oradourian houses and public buildings, leaving them charred forever.

It was the 10th of June 1944 when Oradour-sur-Glane met its fate. German Waffen-SS soldiers targeted this Nazi-occupied French village for mysterious reasons and violated it beyond belief.

The tragedy took place during the Second World War. It was a Saturday afternoon, 2 p.m. to be precise, when men from the Der Führer Regiment of the 2nd Waffen SS Panzer Division, Das Reich, encircled Oradour, sealed it off for outsiders and then entered it.

There, the villagers, including six non-residents, were asked to gather for an ID check. Unaware of any ulterior motives, people reached the Champ de Foire main square, talking and laughing. The men of the village were then separated from the women and kids and put inside barns. There were six barns in total where machine guns had already been installed. Once the men were inside, they were mercilessly gunned down. The wounded bodies lying on the barn floors were then set ablaze. many of the men caught in the flames were still alive! The SS men then targeted the women and children who had been kept locked inside the village church so that they couldn’t flee. 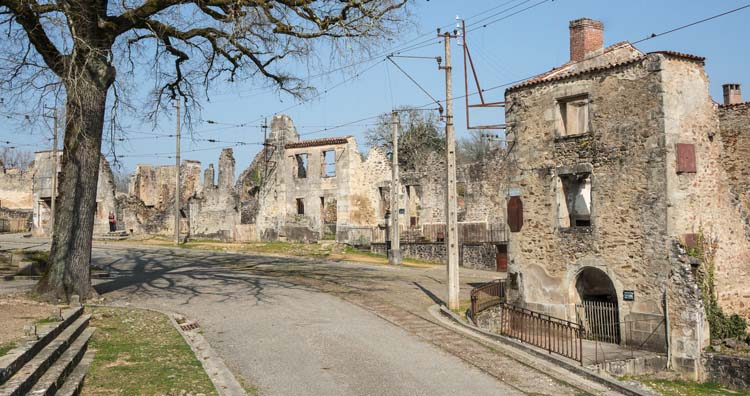 The soldiers didn’t use their guns this time but blew the church up with grenades. When fire engulfed the building, the arching of the walls collapsed, and the melted church bell dropped to the floor. Some women and children did try to escape through the windows, but they were all shot down.

As if that was not enough, army men then roamed the roads of Oradour looking for survivors to kill and then drove the final nail in the coffin by setting the entire village on fire. A total of 642 people lost their lives –190 men, 245 women, and 207 children.

Robert Hébras, a survivor, narrates what he witnessed on that fateful afternoon and how corpses of his own men saved his life.

Robert Hébras, born in 1925 in Oradour-sur-Glane, is among the survivors of the massacre. According to him, the entire act was carried out in a calm and orderly manner. It was not easy escaping the fire or the rampant shootings; Hébras lost his mother, two of his sisters, and many friends in the massacre. He says that he survived only because he hid under a pile of corpses. He had to play dead as the soldiers were shooting everything that moved.

It’s not that bullets didn’t hit Hébras, it’s just that the corpses over him received the maximum impact of the shots.

After the barn where he lay was set ablaze, Hébras crawled out of the barn’s back door. He hid in the woods and stayed there until the danger subsided. Once he was sure the Nazis were gone, he took shelter at one of his relative’s place. Later, he was united with his father, who was out of the village when the massacre took place. 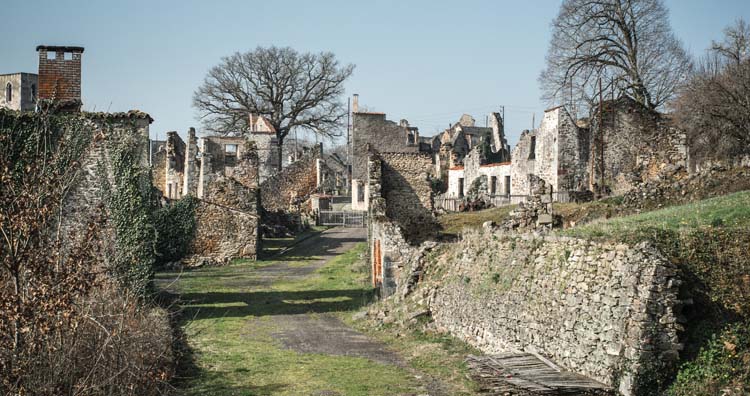 As fires swept through the entire area, accomplishing the mission of destroying Oradour became easy for the soldiers. By 7.30 p.m., much of the village was consumed by flames. Although nothing could escape the massive fire, the troops looted anything valuable that remained. Later in the evening, the soldiers gathered for a celebration at the beautiful house of M. Dupic, a town draper, who too lost his life in the massacre. This was the only house in the village that was spared. SS-Sturmbannführer Adolf Diekmann, who commanded the battalion in action, had been eyeing this house ever since they set foot in Oradour. After all, it had everything starting from valuables and comfort to food and liquor for merriment.

On Sunday, the 11th of June, the men pulled out of the village with loads of loot and livestock.

The ruins of Oradour-sur-Glane still reflect the magnitude and intensity of the savagery the village went through on that fateful summer afternoon. 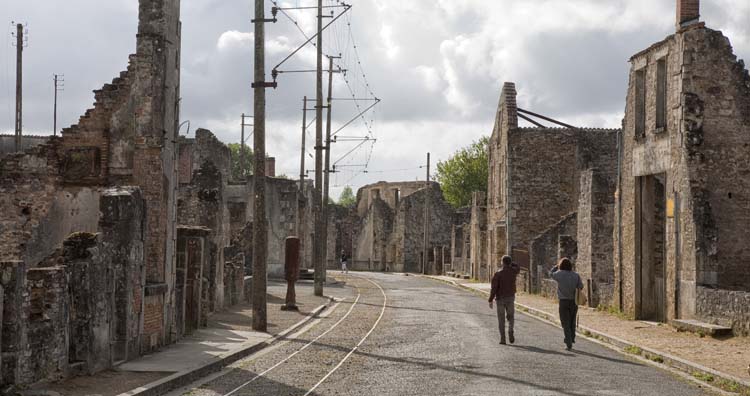 Seven decades on, Oradour still looks close to how it must have appeared immediately after Nazis blew it up. All that remains at the site today are wrecked houses, shops, and churches, ruins of vehicles, crumbling facades, and heat-damaged walls.

For a visitor, the site might be a little disturbing! 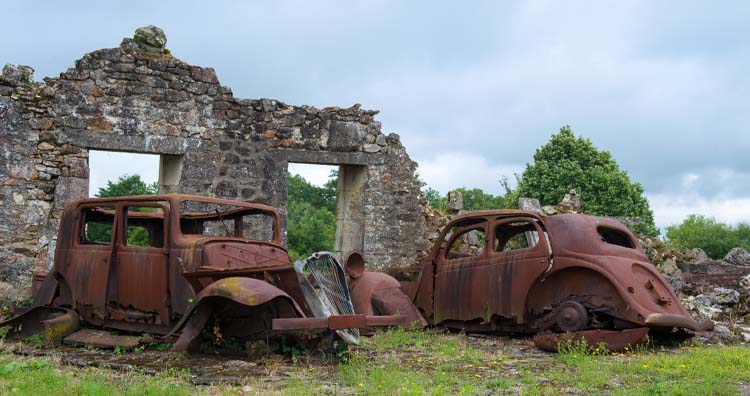 High heat from the fire twisted the lamps in the houses. Even pans and sewing machines became deformed. Ruins of butcher shops still retain meathooks, and the weighing scales lie broken and charred. Rust-clad, ruptured pipes with hanging wires only make the sight harder to bear. The fire did such massive damage that even the corpses (most of them) couldn’t be identified.

Note that only six people survived the massacre. This suggests how heavy-handed the men had been with the villagers.

Oradour-sur-Glane was the seat of the worst Nazi massacre of that time, yet there is no explanation as to why this barbaric war crime was committed.

According to Adolf Diekmann, this act was in response to the abduction and killing of Helmut Kämpfe, an SS commander who Diekmann believed was executed by French insurgents. It was also in retaliation to French resistance experienced by the Germans in nearby Tulle. But questions were raised as to why the entire Oradour village, including its women and children, was destroyed in reprisal.

Sadly, no theory ever put forward has been able to satisfactorily explain the circumstances under which the atrocities were carried out.

The French government has funds dedicated to the preservation of the ruins. No attempts have ever been made to renovate the dilapidated site. 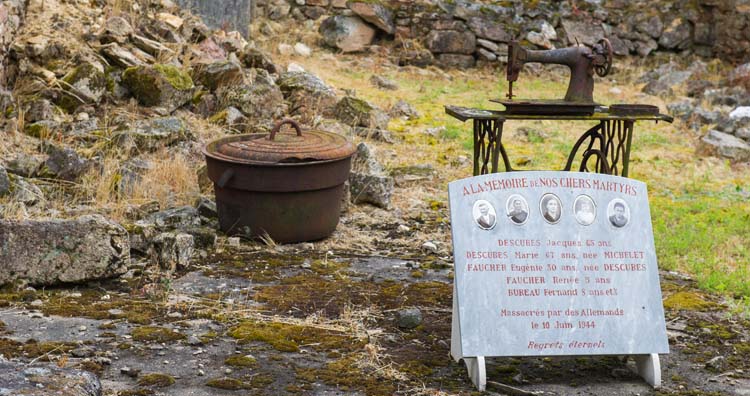 When the war was over, a new village was built near Oradour, but Oradour itself was left untouched on the orders of the then French President Charles de Gaulle. The French government spends around €150,000 a year for the preservation of the site.

A museum known as the Centre de la mémoire d’Oradour was also built near the original site for tourists.

Oradour-sur-Glane, also known as the “Martyr village,” is one of Europe’s major crowd-pullers today, with throngs of tourists visiting the site every year. 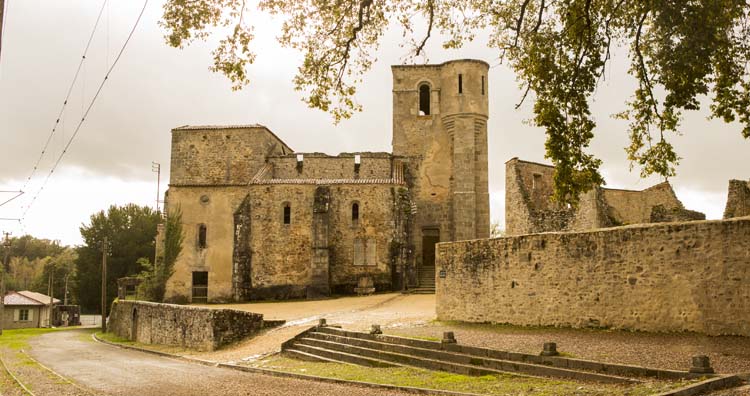 Yes, this preserved site witnesses an impressive annual tourist turnout of around 300,000. The inflow increases on the 10th of June when a commemorative ceremony is held every year in remembrance of the victims.

A procession starts at the new village church at noon and ends at the ruins. Celebrants first visit the church and then proceed to the cemetery to take part in a wreath-laying ceremony.

Talking about justice, Oradour received it only partially. More than half of the perpetrators couldn’t be brought to trial owing to certain circumstances.

In 1953, almost a decade after Oradour was destroyed, charges against 65 of the 200 men involved in the 1944 violence were heard in a military tribunal in Bordeaux, France. The rest couldn’t be identified or were dead. Out of all the perpetrators tried, the Frenchmen who were forcibly conscripted into the SS were released.

Decades have passed since the massacre took place, and neither the French nor the Germans have been able to get over the tragedy. The Germans, however, now acknowledge their wrongdoing, and France isn’t holding on to the past. Both the countries have indeed been in a special relationship called the Franco-German friendship since 1963.

10 Movies that Caused Controversy Before Release

Why Do Crocodile Shed Tears? Here’s What Scientists Say

An Artist Suffered Mysterious Symptoms for Years, and then She Realized Her Sculpture was the Reason

40 Cheesecake Facts Every Foodaholic Must Know!

Doctors on Plane Saved Woman Having a Heart Attack During Flight

15 Weird Facts That Will Change The Way You See Things!