In Upper Black Eddy, Pennsylvania, not far from the place where George Washington made his famous Delaware crossing, a wooded winding trail leads to a seven-acre barren field of nothing but boulders. At first glance, it may seem like a typical rocky stretch of land with regular rocks. But in reality, it is a wondrous geological marvel that defies logic or reason.

This place is aptly called Ringing Rocks Park because the rocks or boulders here possess a strange quality that makes them ring like bells whenever struck with a hammer. These rocks or any rock that produces bell-like sounds when struck are called “sonorous rocks” or “lithophonic rocks.”

Ringing Rocks Park has grown to be a favorite spot for mystery chasers, explorers, and tourists who travel to this small Delaware River community to experience the “singing rocks.” To date, no one knows the exact reason behind these musically talented rocks of nature!

The seven acres of “rock and roll” at Ringing Rocks Park

Ringing Rocks Park has the biggest boulder field of rocks of various shapes and sizes that has a ringing, musical property when struck with a hammer. The rest of the 128-acre park is densely covered in trees, has the largest waterfall in the area, and mesmerizing wildflowers emanate a riot of colors. But despite the park’s beauty, the barren mysterious boulder field containing the ringing rocks attracts the most visitors. The boulders can be as big as ten feet deep in some spots, and save for a few scary spiders, there are hardly any plants or wildlife present.

There are stories passed down from the Native Americans to the first White settlers in the area about how animals stayed away from the rocks and about the cursed boulders that did not let any plants grow on the surface. As per explorers and authors, these ringing rocks resonate with a clear tone, “like that of a blacksmith’s anvil.” They also emphasized the absolute lack of evidence regarding any substantial plant and animal life on the seven acres stretch.

Dr. J.J. Ott, in 1890, collected a number of the ringing rocks that rang at different pitches. Then with the help of a brass band, he performed a few musical selections for the Buckwampum Historical Society gathering. Dr. Ott’s performance on the ringing rocks field can perhaps qualify as the first “rock concert” in history. More recently, continuing the tradition, local musicians perform live jamming on the rocks, making music by striking them with various tools, like other sticks, other rocks, hammers, and railroad spikes.

Why are scientists puzzled about the ringing rocks?

The peculiar nature of the rocks in the Ringing Rocks Park has puzzled scientists over the years. In spite of having the same composition, around one-third of the rocks produce hollow bell-like sounds when hit by a rock or a hammer, while the rest have no such quality and produce a dull thudding sound when struck. Why such contradictions or inconsistencies?

Usually, most boulder field formations happen due to mountainside collapses, and hence they occur at the bottom of a hill or a mountain. But the ringing rocks boulder field is situated on top of a hill. Moreover, there are also no signs of a glacier formation that could have explained the formation of the boulder field.

What causes the bell-like sound of the ringing rocks?

Many scientists, over the years, have tried to uncover the reason behind the chiming sound of the ringing rocks. Scientific investigations revealed that these rocks might be made up of a substance very similar in composition to a volcanic basalt called “diabase,” which is one of the main components of the Earth’s crust. This diabase has significant amounts of aluminum and iron. It was earlier believed that the high iron content of the rocks was the reason behind their ringing abilities. But later, this theory could not stand on strong ground because chemical analysis showed that though the iron content was 9%-12% and considered high in igneous rock standards, it is within the normal range for basalt.

Again, theories about the conditions in which the rocks are placed, stacked, and shaped may influence the sounds, but they cannot, by themselves, make the rocks ring.

The study that came closest to a credible theory

But an informal study in 1965 came closest to finding a credible theory. A Rutgers University professor performed informal experiments on a few boulders from the Bucks County Park field. He sliced, crushed, and broke the rocks to discover their characteristics. After 24 hours, he found out that the “musically live” rocks, after cutting, underwent expansion, whereas the “dead” rocks didn’t. This could prove that the live rocks were under internal elastic stress that got released as soon as they were sawed or sliced.

Since the live boulders are usually found in the middle of the boulder field, they do not come in contact with either soil or shade. Hence, their extremely slow weathering causes immense internal stresses. Contrary to this, the dead rocks, mostly found along the sides, weather quickly and break apart before any stresses can form.

From this study, what has emerged is an important fact – the ringing rocks expand when stress is released, and this is a likely cause of their ringing ability.

But to know for sure what caused the internal stress, more rigorous testing is required.

A theory: the ringing rocks act like a guitar string.

“As hammers strike stone, the powerful clangs resonate like church bells and bring to life a natural sonic wonder.” ∼ Thomas Rex, a field recordist in Philadelphia.

The ringing rock boulders act like guitar strings. This “relict stress” theory can explain the ringing rocks phenomenon, based on the informal study at Rutgers. When a guitar string is relaxed and floppy, it does not vibrate but makes a dull, low sound. But when the strings are tight and under tension, it makes music and a series of sounds depending on the level of applied tension. In the same way, ringing rock boulders emit dull thud sounds when the boulder is de-stressed. However, boulders resonate at various frequencies depending on the level of stress inside the rocks.

Over a dozen boulder fields have been identified across southeast Pennsylvania.

The boulder field at Ringing Rocks Park is one of many in the state. There are boulder fields like the ringing rocks strewn across Pennsylvania. But most of these places are either private property or have been destroyed due to urbanization. Out of these, there are only three boulder fields that are open to the public. These are Ringing Hill Park, Stony Garden, and the Ringing Rocks County Park.

But unfortunately, in the last few decades, tourists and visitors have picked most of the pebble-sized boulders from these fields either to perform scientific studies or just because they could. Apart from the U.S.A, ringing rocks are also present in New South Wales, Australia, as well as the English Lake District.

Mystery still surrounds the ringing rocks, as scientists still do not know for sure!

Scientific studies could not provide any definitive explanation as to why the rocks ring. Though many theories help explain the phenomenon of ringing rocks, there is no definitive explanation. From mysterious magnetic fields to being an ancient ceremonial ground for Native American rituals, as well as the result of a meteorite crash, theories are plenty. But it remains a hugely popular tourist destination for families, students of geology, as well as scientists, paranormal enthusiasts, and mystery seekers. But one image remains constant throughout the years. Children and adults running around the park with a hammer in hand, a scene that is quite scary for those who do not know!

Did you know that the bluestone that forms the inner circle of Stonehenge has been discovered to have the same musical ability as the ringing rocks? 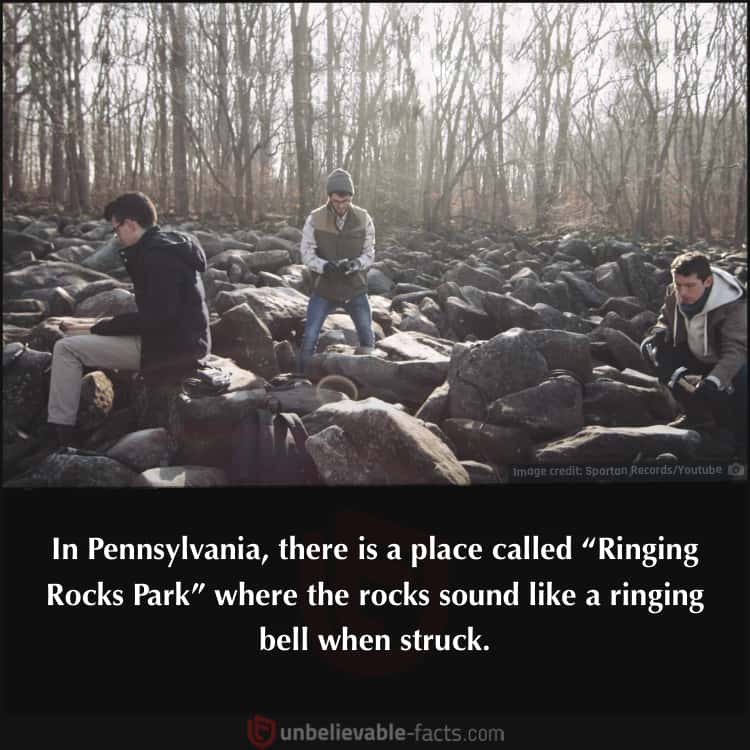 Tree Mystery of Crown Shyness: “Anti-Social” Trees that Avoid Touching each Other

20 Best Drive-In Movie Theatres in the US

Dora Ratjen, the German Athlete in Women’s High Jump at 1930 Olympics Who was Later Discovered To Be a Man

The Centennial Light is the Oldest and Longest-Lasting Light Bulb in the World. It Has Been Burning for over 118 Years

You have a Look-alike on this Planet, Not Convinced?, Well Here’s Proof

10 Bizarre but Interesting Facts about Bats

Before And After Photoshopped Celebrities.