by Rituparna Nandan3 months ago6 min read
Related posts
10 Mysteries from the Past that Were Solved in Recent Times 5.3k views
18 Horrifying Facts That You’d Hate to Know, But You Should 998 views
Some Unbelievable Facts About Human Eye. 2.2k views
11 Historical Events that Sound Like Fiction but Are Actually Real 1.1k views
4k views

When thinking about an adventure or planning a vacation, no one really thinks about Namibia. Let’s give you an undeniable reason – the world’s largest meteorite remains hidden on a farm near Grootfontein, Namibia. That’s right! We are talking about the 50-ton Hoba meteorite.

How was Hoba discovered?

The Hoba meteorite, short for Hoba West, was discovered by Harmanus Brits in 1920. When Brits was a farmer tilling his land, his plow struck something metallic and stopped. When he inspected further, it seemed like a solid chunk of metal embedded in the soil. It was covered with dirt, which made it impossible for Brits to estimate its size. He informed others, and finally, the local authorities were notified. Once they dug the soil and land around it, the behemoth we now know as the Hoba meteorite was unearthed.

Although it was discovered more than a century ago, it didn’t take long for the local authorities to deduce that it was a meteorite. Hoba is named after the farm Brits owned and worked. Almost all iron meteorites have been moved to museums except the Hoba meteorite. Allegedly, the American Museum of Natural History wanted to purchase it. However, its weight and girth make excavation and transport almost impossible.

When did the Hoba meteorite arrive on Earth?

When modern scientists tested the meteorite, they found it to be 200 to 400 million years old. It may be difficult to visualize how long ago that was. So, let’s help you out – basically, the dinosaurs were still alive and roaming on earth when this piece of “rock” was in its nascent development.

Although it is impossible to predict precisely when Hoba decided to call Earth “home,” scientists state that it may have landed around 80,000 years ago. Data from the most recent surveys show that it may have landed more recently, likely between 60,000 and 80,000 years ago. It is quite amazing to think that some of our direct ancestors may have witnessed the Hoba meteorite crash into the Earth while going about their daily chores.

Why doesn’t it have a crater?

It is difficult to imagine that a meteorite weighing 50 tons crashed into the Earth but has no crater. Did the crater simply disappear due to normal soil movement and erosion? Well, that is just not possible. The lack of a crater makes Hoba extra special among all meteorites that have been found on Earth so far. There is no evidence to suggest that the area where Hoba landed was a deep-water body, which could have absorbed the impact and prevented the formation of a crater.

Researchers believe that Hoba may have weighed over 66 tons when it landed on the Earth. It may have lost around 16 tons due to the natural oxidation process. The heavy weight combined with its rather flat appearance may have caused Hoba to enter the Earth’s atmosphere slower than other meteorites. The angle at which it traveled could have also influenced its impact on the Earth. The Smithsonian speculates the relative flatness of Hoba caused it to slow down significantly during its journey through the atmosphere due to high air resistance.

What is the Hoba meteorite made of?

The Hoba meteorite currently measures around 2.7 meters or nine feet across. It currently weighs around 50 tons (although many sources suggest it’s a 66-ton meteorite). It is around one meter or 3.2 feet thick. There’s enough reason for the varying weights you can find on different websites. Since Hoba is around 84% iron and 16% nickel, it has oxidized over the years. That has contributed to the reduction in weight significantly. The Hoba meteorite also has traces of cobalt and a layer of iron hydroxides on the top due to natural oxidation.

Over the years, sampling for surveys and research has also caused a loss in weight. Some sources suggest that Hoba has lost around two tons of its bulk in the last century due to scientific sampling, erosion, and vandalism. Most meteorites that land on Earth are classified as stony, stony iron, and iron. Hoba falls under the category of ataxite (iron meteorites), and these come from the cores of asteroids. These comprise fewer than 5% of all meteorites to ever reach Earth. That makes the 50-ton Hoba quite exceptional.

Can a meteorite like Hoba cause another mass extinction?

Now that you know about the largest meteorite discovered on earth, the next obvious question is, “How did a meteorite like this kill the dinosaurs? And what happens when another one strikes?” Let’s put your mind at ease. The latest and most advanced technology allows scientists to detect celestial objects traveling toward the Earth. They can determine if any of them will pose a serious threat. And we even have systems in place to obliterate these threats.

The biggest difference between Hoba and the meteorite that killed the dinosaurs is the size and speed. NatGeo states the impact that ended the era of the dinosaurs was caused by a six-mile-wide asteroid now named Chicxulub. While Hoba is a mere 50-ton (45,359.2 kg) meteorite, Chicxulub was allegedly between 1.0×1015 kg to 4.6×1017 kg and the size of a country! Upon impact, Chicxulub threw rocks 25 kilometers high from the depth of the Earth’s crust. The crater’s edge was higher than the highest point of the Himalayas. Therefore, a meteorite like Hoba is too tame to cause a mass extinction-like event.

Why is the Hoba meteorite so special? 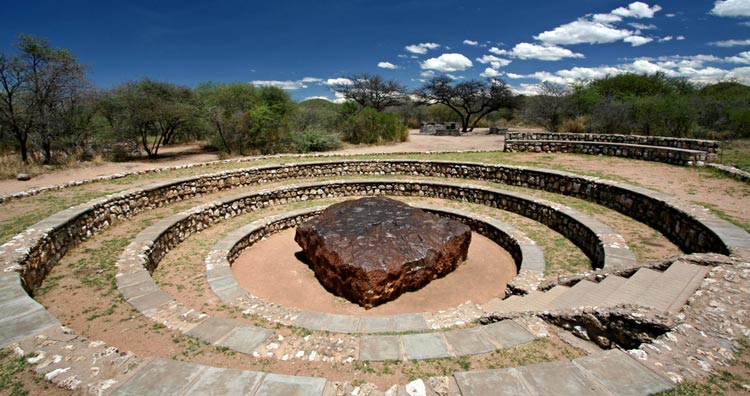 Charles Osborne,Man From U.S Had Hiccups for 68 Years continuously.

15 Awesome facts that will make your day!

10 Everyday Things You Never Knew Had a Purpose

10 Facts that Seem Exaggerated but are Actually True!