Did you know that a baby elephant can weigh about 200 pounds at birth? Yes, these fascinating mammals are the strongest, heaviest, and largest creatures to walk the Earth. In fact, male elephants grow as tall as three meters and weigh up to six tons.

They are also one of the most intelligent animals. It’s only natural to be intrigued by these magnanimous creatures, so, here are 10 interesting facts you should know about elephants!

1 Elephants are a keystone species.

Elephants play a critical role in shaping the ecosystem in many ways. Termed as “ecosystem engineers,” elephants greatly help in opening up forest clearings.

For instance, the Borneo pygmy elephants, the smallest of all elephants, act as a lifeline for the forest ecosystems of Borneo. They play a vital role in ensuring the health of the ecosystem by acting as seed dispersers across their ranges. They help in reinforcing the green cover essential for all life forms. (1,2)

2 They consume nearly 1% of their body mass every day.

These magnificent animals are known to eat about 1% of their body weight in dry mass each day. Since they can weigh as much as six tons, the amount of food consumed goes up to 60 kg (132 lbs) of dry food without adding the water content.

Elephants do not sleep much. They travel miles in search of huge quantities of food that is essential to sustain their large bodies. They grab their food with their trunks, which can easily be regarded as their most amazing body part. Their trunks are not only used for grasping but also for touching, smelling, breathing, and producing sound.

Their trunks are made of more than 40,000 muscles and tendons which accounts for their precision. Humans, on the other hand, have about 600 muscles in their bodies. This is why elephants can pick things as small as a coin from the ground. (1,2)

3 They are natural-born swimmers.

While elephants cannot jump, they can surely swim. They can breathe through their trunk while being completely submerged underwater. These majestic creatures are accomplished swimmers and can swim up to 31 miles.

It is also said that elephants’ trunks have initially evolved as a snorkel for breathing while underwater which later on went on to serve several other purposes. Their bodies are highly buoyant, and they can easily relax in water by floating. (1,2)

4 They exhibit an exceptional memory power.

Scientists often believe that the exceptional memory of elephants is one of the foolproof ways by which they kept enemies from hurting them. The matriarch who leads the clan also tends to remember their friends and enemies and so protects the members. The herds can remember where they found food and water previously.

They also have remarkable levels of recall power. Two elephants that had performed together for a few months at a circus recognized each other when they were reunited 23 years later. Elephants can also recognize themselves in front of a mirror.

While the generalization that “an elephant never forgets” is not entirely true, research claims that they possess strong memory. (1,2,3)

Elephants employ a variety of subtle movements and gestures in order to communicate with each other. They are known to spread their ears wide when they are angry. The bond between a mother elephant and her offspring is demonstrated by the way she protectively caresses the baby.

If you see an elephant lifting its trunk up in the shape of the letter “S,” it might be detecting new smells carried by the wind. It also indicates that the elephant is awaiting new information, like in scenarios where it perceives danger or meets strangers.

For example, when an elephant feels uneasy or confused about what to do, they might start to touch their face, ears, mouth, trunk, or the tusk with the trunk as an act of reassurance and self-soothing.

Elephants are empathetic and are often seen paying homage to the dead members of their clan. They use their tusks and trunks to try and feed/ lift their dead friends. (source)

6 They have enhanced learning skills.

Elephant brains are absolutely the largest among all the mammals on land. In comparison to humans, their brains also have an extremely large number of neurons. The brain of an African elephant contains about 257 billion neurons, which is easily three times the number of neurons a human brain has.

However, the largest number of neurons are present in the cerebellum which aids in enhancing sensory functions. So, elephants tend to grasp a great deal of information from the environment around them and by doing that, have great learning skills.

This has been demonstrated in several cases. For instance, an elephant once learned from its mates about a sanctuary, and when it was injured by the poachers, it made use of this second-hand knowledge to seek help from humans of that sanctuary. (1,2,3)

7 They give special “bee” alerts.

The world’s largest animal is extremely scared of tiny honeybees. In spite of having a skin that is about two inches thick, elephants have sensitive and soft flesh around their eyes, mouth, and trunk. That is why they get startled by the sound of swarming bees.

As a matter of fact, they also have a special alarm call aimed at alerting the others in their clan about incoming bees referred to as the “bee rumble.” Elephants were also seen to retreat when a recording of this sound was played despite the fact that there were no bees around. (1,2,3)

8 Their bodies contain a zombie gene that gives cancer protection.

Studies have revealed that elephants have extra copies of two cancer-resisting and fighting genes – P53. These genes hunt for cells containing miscopied DNA and eradicate any such cells before they can form tumors. They are responsible for the low death rates from cancer observed in elephants (5%) as against the 25% death rate observed in humans. (1,2)

9 They remember and mourn deaths.

Just like humans, elephants can feel emotions. In fact, several researchers have noted that their reaction to death is one of the strangest things about elephants. Elephants almost always show a keen interest in their dead peers, even after several years of death.

This has been proven by a researcher who once played a recording of an elephant that passed away, and its daughter searched for her mother for several days after the incident. Other than humans, elephants are the only creatures to have such a diversity of neurons in the brain, and this is responsible for their abilities like empathy, self-recognition, and social communication. (1,2,3)

10 Intense elephant poaching has led to “no tusks.”

With huge numbers of elephants being poached, human activities have literally resulted in natural selection wherein a higher number of elephants are now being born without tusks in the last few decades. (source)

Before we reach the end, we would like to make an appeal to our readers. The unique spinal structure of elephants contains bony protrusions that cannot support the weight of tourists sitting on them every day. Elephants are isolated and trained using abusive methods to become submissive to humans. 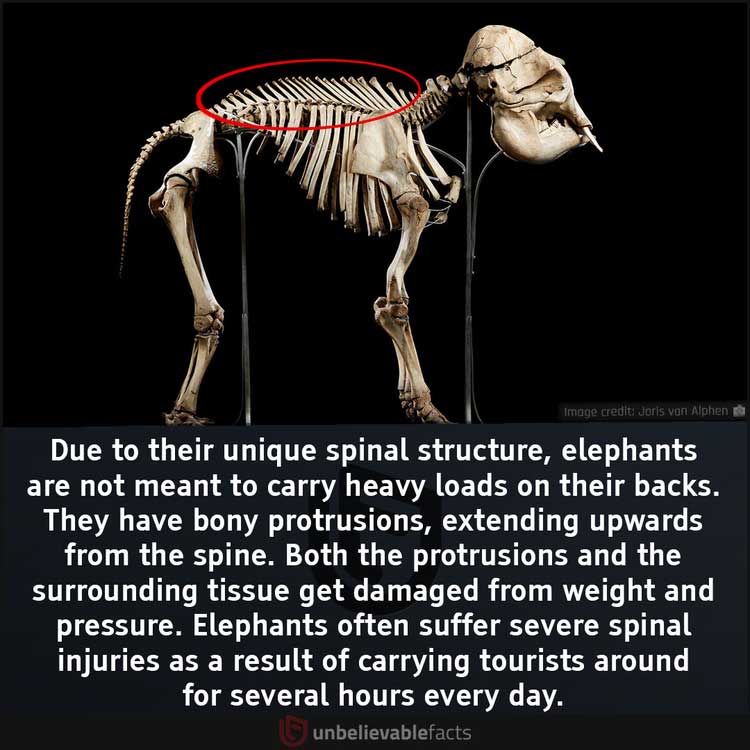 We urge all our viewers to be henceforth aware of these horrific training methods used by elephant keepers and do your part in saving these innocent creatures from stress and trauma. (source)

10 of the Most Thrilling Roads in the World

Exploration of a River on Mars by ESA.

In 1974, A Photographer Took Pictures Of Two Mimes. 35 Years Later, He Was Surprised When He Realized Who They Were

10 Facts That Should Be Common Knowledge, But Aren’t – Part 2

13 Astonishing Facts About Our Planet Earth!