The Ancient City of Cahokia Was a Bustling Metropolis with a Population Similar to London’s, but It Was Inexplicably Abandoned by 1350

by Unbelievable Facts3 years ago7 min read
Related posts
13 Lesser Known Facts about the Life of Actor Johnny Depp 16.6k views
10 Most Interesting Solved Mysteries with Answers both Mundane and Strange 1.3k views
A Florida based company has created headphones that can get you high on music by nerve-stimulation and it’s totally legal 601 views
NASA Bombed Moon By A 2 Tonne Centaur Rocket- A $79 Million Science Experiment To Discover Water On Moon. 1.8k views
858 views

The Ancient City of Cahokia Was a Bustling Metropolis with a Population Similar to London’s, but It Was Inexplicably Abandoned by 1350

Situated in present-day Illinois, Cahokia was once the largest cosmopolitan metropolis north of Mexico. It existed sometime around 1050 to 1350 CE and was mainly inhabited by the indigenous Mississippians who occupied a large portion of the southeastern United States. In its heyday, approximately four hundred years before Columbus set foot in the Americas, Cahokia was a bustling Native American city, and its population is said to have been higher than London’s at that same time. However, the city was abandoned by 1350, and no one knows why. Recent studies have shed some light as to what might have happened during that mysterious period.

Cahokia covered an area of approximately six to nine square miles and had around 10,000 to 20,000 residents in its prime.

Contrary to what many people might believe, Cahokia was a cosmopolitan and sophisticated city for its time. From the beginning itself, the city was carefully planned and laid out. It covered an area of six to nine square miles and had a unique mix of people as residents. People from all over the Mississippian-controlled region came to live here, and the Ofo, the Choctaw, the Pensacola, and the Natchez were some of the notable tribes. Many experts have likened Cahokia’s population diversity to that of early-day Manhattan. In fact, when archeologists studied the teeth of some of the buried remains and performed strontium tests, they discovered that a third of Cahokia’s population came from somewhere else.

Inside the borders of the city, there were around 120 mounds, thatched-roof houses, and broad public plazas. Cahokia also has the largest earthen mound in all of North America.

The Native American residents of Cahokia hunted, traded, and farmed, but they were also excellent builders and early urban planners with ample knowledge of astronomical alignments. They were avid mound builders, and they hand-built around 120 earthen mounds inside the borders of the city. Building these mounds would have required backbreaking labor. The Mississippians would have had to dig up, haul, and stack over 55 million cubic feet of earth, and the mounds would have taken a few decades to build.

The largest mound, later named “Monk’s Mound,” was the central focus of Cahokia. It was a huge platform mound that was around 10 stories tall and has four terraces. The south-facing mound covered an area of 13.8 acres, and it was 836 feet wide, 951 feet long, and 100 feet high. The massive height and size of the mound were achieved over several centuries, and there were at least ten separate construction episodes.

According to archeologists, Monk’s Mound was also the site of a large building where the city’s spiritual and political leaders would meet. A wooden palisade surrounded the town center where leaders, pilgrims, and residents gathered to worship and perform various ceremonies. The majority of the Mississippians lived outside of the palisade in 12-foot-wide and 15-foot-long rectangular houses with a single room, wooden post walls, and a thatched roof.

Cahokia was not a campsite or a collection of villages. Rather, it was a planned city, where the houses were linked by pathways and courtyards which formed a shared, physical connection, much like modern streets do. Four huge plazas were built to the south, north, west, and east sides of Monk’s Mound. The Mississippians also planned an east-west road that connected Cahokia to present-day St. Louis.

Archeologists believe that Cahokia was originally built to serve as a pilgrimage site, but over time, a large number of people flocked to it and started residing here. Archeological evidence has also shed light on what life was like in this ancient city.

The Mississippians had a wide presence all throughout the eastern part of the United States. They had strategically built villages near important trade routes and sources of food and water. However, the same cannot be said about Cahokia. Although close to the Mississippi and Missouri rivers and rich in fish, deer, and timber, the area was flood-prone. So, it was risky to build a settlement there. That is why experts believe that Cahokia was most likely built as a pilgrimage site where the Mississippians would gather for important religious events. However, sometime around 1000 CE, it became a major religious center and drew residents from all over the continent.

In its prime, the city must have seen major activity. The men spent time hunting, cutting trees for construction, and growing and storing corn. Women, on the other hand, would tend to the homes and fields, weave fabrics and mats, make pottery, and perform social activities in the small gardens and courtyards that existed outside of every grouping of houses. Sacred ceremonies and meetings would be held at the plazas and in the buildings that were inside the palisade.

The Mississippians used the positions of the stars, the Moon, and the Sun to orient the city’s center in an east-west fashion. To the west of Monk’s Mound, there was a circle of tall poles that marked the winter and summer solstices as well as the fall and spring equinoxes. When studying the area, archeologists re-erected these poles and named them “Woodhenge.”

Cahokia’s decline is shrouded in mystery, as there are no clear indications as to why the Mississippians abandoned the city. 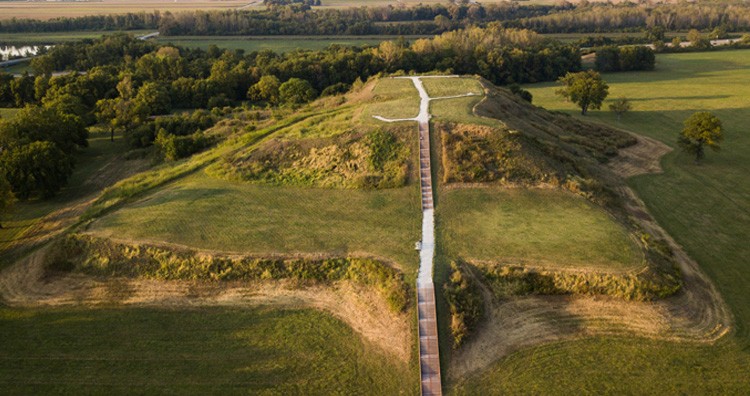 Despite becoming a major religious hub and population center around 1050 CE, Cahokia was largely abandoned by 1350, and no one knows what caused it. Neither European conquest nor war or disease can be blamed for this ancient city’s downfall. Climate change, drought, flooding, population movement, and internal conflict are thought to be some of the possible causes. In fact, archeologists might have found evidence to support the last one.
Advertisements

One of the mounds at Cahokia contained mass burials. Experts also suggest that the Mississippians might have practiced ritualistic human sacrifices. Though they did not face any outside threats, the residents might have doled out violence against each other. In the end, social and political unrest might have driven people out of this once cherished city. However, whatever went on in Cahokia apparently left a lasting negative impression, and tales of this ancient city have all but disappeared from Native American oral histories and folklore.

Recent studies and analysis of ancient human feces have revealed some important details.

For the longest time, experts believed that Cahokia was completely abandoned by the mid-1300s. However, recent studies have revealed that the area was indeed abandoned, but only briefly. When Columbus set sail, Cahokia had already started repopulating, and by 1650, its population had reached an all-time high. Archeologists reached this conclusion by examining fecal evidence, or in simpler terms, by studying ancient human poop.

Human poop contains certain molecular signatures called “stanols,” and rain washes these molecules into basins and lakes. That is why experts can study sediments and figure out how many people lived in nearby regions. After studying sediment cores taken from either side of the nearby Horseshoe Lake, archeologists were able to determine that the population in the area had increased sometime around 1500 CE.

Scientists Have Discovered Radiation-Eating Fungus on the Walls of the Chernobyl Nuclear Reactor, and it Might Be Useful to Humans

Scientists Have Detected a Mysterious Radio Signal Coming from Deep Space and it Repeats Every 16 Days, but they Are yet to Figure Out its Source

10 Privileges the Rich Have in the World

The Great Attractor, the Elusive Gravitational Anomaly that’s Pulling the Milky Way Towards It

The Evolution of 8 Superheroes, Then and Now.