Previous Next
Some people will not to believe it, but this phenomenon can be demonstrated in your own freezer under the proper conditions.
If you have two pails filled with equal amounts of water, one hot and one cold, and you set them out in the snow on a cold winter’s morning, what happens? 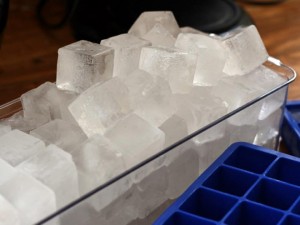 What Should Happen
Any reasonable person would think that the hot pail would take longer than the cold pail to freeze. After all, the hot water needs extra time to reach the same temperature as the cold pail. When the hot pail finally does reach the same temperature as the cold pail initially was, the cold pail should already be frozen.
What Actually Happens
There are several things that help the hot pail freeze faster than the cold pail. Here are what is thought to be the most significant factors:
Layer of ice forms on the top of the cold water.
The hot water is more likely to be supercooled. This means that the hot water’s temperature is more likely to cool to temperatures below zero degrees Celsius. In the cold non-supercooled water, ice crystals form and float to the top, forming a sheet of ice over the top of the water, creating an insulating layer between the cooler air and the water. This ice sheet also stops evaporation. In the hot water that has become supercooled (thus, no longer hot) the water, when it does freeze, freezes throughout, creating more or less of a slush before freezing solid.
Why is hot water more likely to be supercooled? Because hot water is less likely to contain tiny gas bubbles. Gas bubbles form from dissolved gasses as the water cools. When the hot water was heated, these dissolved gasses may have been driven out. In cold water, ice crystals use the tiny bubbles as starting points for formation (in physics, we call them nucleation points). But in the hot water, there are no bubbles, so there aren’t as many starting points for the ice crystals.
Dissolved gasses also lower the freezing point. Since heated gas is less likely to contain dissolved gasses, it’s more likely to freeze first.
Water in the hot water pail evaporates at a much faster rate than the cold water. This does two things.
First, the process of evaporation is endothermic, which means it takes energy for something to evaporate. As a molecule of water evaporates, it leaves the surface of the water and flies into the atmosphere. Thus, in simplified terms, the molecule converted heat energy into kinetic energy (energy of motion). Since the hot water evaporates quicker than the cold water, it loses heat energy quicker than the cold energy.
Second, since some of the hot water evaporates away, there is less water left to have to freeze.
The hot water pail will melt the surrounding snow. Later, as it begins to freeze, the snow around the pail will freeze back so that it more closely “touches” the pail. The cold water pail is then only sitting in fluffy airy snow, while the hot water pail is in a form fitting ice-crust. The ice-crust will obviously conduct the cold better that the airy snow.
[Source]
Advertisements

Back to Top
Close
We use cookies on our website to give you the most relevant experience by remembering your preferences and repeat visits. By clicking “Accept”, you consent to the use of ALL the cookies.
Cookie settingsACCEPT
Manage consent

This website uses cookies to improve your experience while you navigate through the website. Out of these, the cookies that are categorized as necessary are stored on your browser as they are essential for the working of basic functionalities of the website. We also use third-party cookies that help us analyze and understand how you use this website. These cookies will be stored in your browser only with your consent. You also have the option to opt-out of these cookies. But opting out of some of these cookies may affect your browsing experience.
Necessary Always Enabled

Performance cookies are used to understand and analyze the key performance indexes of the website which helps in delivering a better user experience for the visitors.

Analytical cookies are used to understand how visitors interact with the website. These cookies help provide information on metrics the number of visitors, bounce rate, traffic source, etc.

Advertisement cookies are used to provide visitors with relevant ads and marketing campaigns. These cookies track visitors across websites and collect information to provide customized ads.

Other uncategorized cookies are those that are being analyzed and have not been classified into a category as yet.