American writer Kurt Vonnegut wrote that ” Science is magic that works.” It opens up a universe of realities and opportunities waiting to happen. One such scientific incident involves a story narrated by David Swenson of the 3M adhesive tape factory, where the workers experienced a glitch and encountered an invisible wall that did not let humans pass through. No, it is not a sci-fi Hollywood movie. This supposedly happened in South Carolina during a late summer day in 1980 and is perfectly explainable by the laws of physics.

So, let’s find out the story behind the invisible wall that baffled everyone present.

What was happening at the factory before the invisible wall was created?

It was an extremely humid day in August of 1980, and work was going on as usual. To put it simply, plastic films were run at high speed and split into jumbo rolls for coating with adhesive to make tape. But to explain this in more detail, Polypropylene (PP) film made up of 50,000 ft rolls that were 20 ft wide (almost the width of three lanes of traffic on the interstate) was being cut and transferred to numerous smaller spools. This PP film was being taken off the main roll at a very high speed, flowing upwards 20 ft to the overhead rollers, passing 20 ft horizontally, and finally traveling downwards towards the slitting device. There, they were spooled onto much shorter rolls.

As per Swenson, this entire operation formed a dynamic cube-shaped tent with two walls and a ceiling of approximately 20-ft square. The speed of these spools was 1000 ft/min, or around ten mph. The invisible wall was created in the area below the fast-moving sheet of electrically charged film in the middle of the tent.

How did David Swenson describe the invisible wall?

David Swenson of the 3M Electrical Specialties Division in Austin visited the South Carolina 3M factory to investigate. As per Swenson, when entered the factory floor and was still as far as 20 ft from the equipment, his hand-held electrometer slammed to a full scale of 200KV/ft. His hair, too, began to stand on end, and it felt like sparklers were hitting him from all sides. When he tried to walk through the corridor of the moving film, he slammed into an invisible and impenetrable wall.

It felt like an invisible force field was blocking it. Though he could lean his weight forward, he could not pass through. Anybody near the wall was unable to turn and had to walk backward to get far enough from its effect. Swenson also observed a fly that got pulled into the electrically charged field. In his report, he stated that the force was strong enough to even suck in birds.

“I didn’t know whether to fix it or sell tickets,” the production manager remarked.

Mr. Swenson described the phenomenon in his report, but the production manager at the factory did not believe them. The wall had disappeared by the time he arrived, but the factory workers were able to recreate the same occurrence another day during the same early morning hour. It was the same conditions as the previous day. The experiment was successful, and the invisible wall appeared again, this time even stronger! With the electrical charge, even the short curly hair of the production manager became straight! Laughingly, he exclaimed that he didn’t know whether to fix it or sell tickets. But of course, they fixed it.

How was the invisible wall created?

Experts are divided on their opinion and views on the credibility of the invisible wall story. Some say that however incredible it may seem, science has a reasonable explanation for this. But there are others who think that it is strange that the wall pushed back humans because electric charges can attract neutral objects, but should not repel them. Whatever it may be, most experts believe that with perfect conditions, it is possible.

A dangerous aspect of such factories, apart from fast-moving spools, is the huge static charge produced whenever plastic-sheets are unrolled. This explains why Swenson’s meter pegged at 200KV/ft as soon as he came near the field. The amount of static electricity had to be in the megavolt range for that to happen.

This phenomenon can be explained with the help of a phenomenon called “Coulomb’s forces,” or electrostatic force, which is a law of static attraction and repulsion of particles and objects because of their electric charges. A balloon sticking to the wall, nylon clothes giving off static electricity, a photocopier, a comb attracting pieces of paper, or us giving a shock touching a car door on a dry day, are all examples of Coulomb’s forces.

In the case of the 3M factory, the electric charge was moving at a very high speed. Two stationary objects with the same charge repel each other, but when moving, create magnetic fields around them that attract each other. This process ultimately creates a charged vortex sheath, which is an ideal situation for the creation of an invisible wall.

Ionized air and static electricity may have helped create the invisible wall. 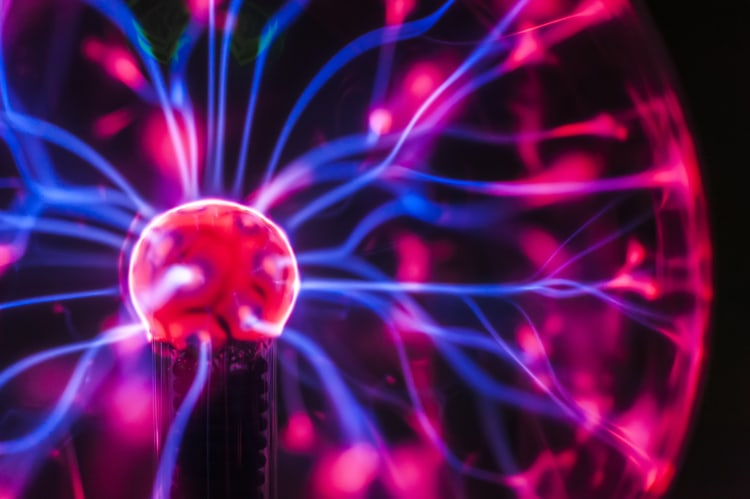 In the 3M factory incident, the high-speed roller was delivering a constant supply of the same charge to the dynamic tent-like structure that was created on the factory floor by the high-speed moving film. Inside the tent, friction caused the air to rotate with the same charge as the plastic film. Since the particles were experiencing repulsion because of the same charge, the sheath could not contract there. Neither could it expand outwards as this electrically charged air starts to create attractive forces between the parallel moving particles while drawing more charge from the moving plastic web.

This creates a very tightly bound sheath of air molecules and charged particles.  And every second, newly charged particles are added. Also, because of the constant movement, there is no discharge happening, either. This tight sheath would normally be invisible and feel like a solid wall with a defined edge and soft center. On the day of the invisible wall, the temperature was 80 °F with a relative humidity of 75 to 80%, which also created the perfect conditions for this phenomenon. The solution to making the wall go away was easy and cost-effective. The workers fixed the grounding issue on the machine, and the invisible wall was gone.

Swenson later stated in a talk at the Electrostatic Discharge Symposium proceedings in 1995 that despite numerous inquiries, several explanations, and attempts, the invisible wall has not been re-created – at least as far as he knows! Even the U.S Department of Defense was interested in observing the phenomenon, but it never worked out!

Marine Iguanas: The Godzilla-like Lizards of the Galapagos

10 Stories of Life Sacrifices that Are Truly Sentimental

There exists a species of Lizard which shoots blood from its eye as a defensive mechanism against larger predators.

10 Weird Things that Happened at Funerals