6. Otters have special pockets on their skin to store their favorite rocks.

Sea otters using rocks to crack open shellfish such as crabs and clams are a common sight. They are seen using rocks to hit abalone shells and make them loosen their grip on the seafloor in just 15 seconds.

7. There’s an island in Japan populated only by fluffy, cute bunnies. 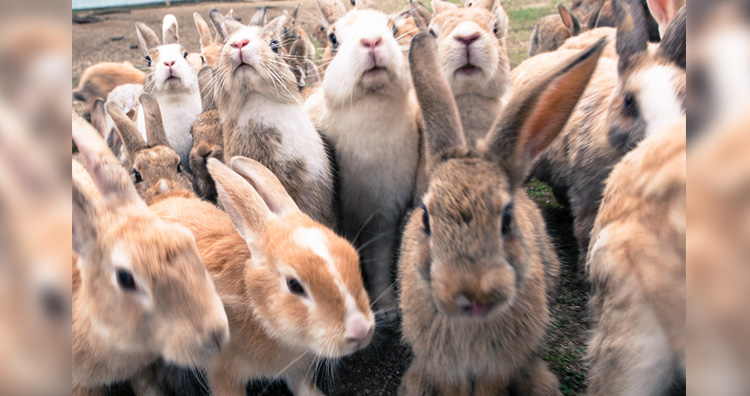 Okunoshima, an island in Japan, must be the cutest island in the world. The reason for that is the entire island is populated by hundreds of cute rabbits that just roam around and enjoy their life there. Before the time of the rabbits, the island had a dark past.

During World War II, the Japanese army used the island to secretly produce poison gas. There is a Poison Gas Museum on the island, but the cute rabbits are doing a good job of diverting the tourists’ attention away from the island’s dark history.

Although there is no exact explanation for the arrival of rabbits on the island, there is one probable explanation. During the war, when the Japanese army was secretly producing poison gas on the discreetly located island, a colony of rabbits was unfortunately brought to the island for lab test purposes. Some people believe that the current rabbits are descendants of the rabbits who were released by the army once the war ended.

This takes many people by surprise. Polar bears are residents of the coldest place on the planet. Their thick coat of fur and the thick layer of fat provides them with the insulation required to survive the coldest environment.

Fur even grows on the bottom of their paws protecting them from cold surfaces while helping them to get a good grip on slippery ice.

But, underneath their white furry coat, they have black skin. Black skin helps polar bears to better soak-in the warm rays of the sun. (source)

9. Butterflies taste with their feet.

The feet of butterflies are embedded with taste receptors. So, wherever they land, butterflies get to taste their surroundings. Sometimes, it might get really unpleasant in case they land in unfortunate places. But for a butterfly, tasting with their feet serves a greater purpose.

University of Arizona’s entomologist, Katy Prudic, explains that being able to taste with their feet makes it possible for butterflies to decide whether the surface is appropriate for laying eggs. They make sure with their feet whether the plant they have chosen would serve as a good food source for their caterpillar babies.

Butterflies are not the only ones who have olfactory senses at bizarre locations. Locusts and crickets have taste receptors on the organ that deposits the eggs. This way, they can make sure whether the dirt they are putting their eggs on would be good for their babies. (source)

10. From its discovery to the time when it was kicked out of the solar system, Pluto is yet to complete one revolution around the sun.

The first time Pluto was discovered was 1930 – February 18, to be precise. Fast forward to August 2006. Pluto was then declared a “dwarf planet.”

The International Astronomical Union (IAU) classified Pluto as a dwarf planet because Pluto is not gravitationally dominant in its orbit and shares the orbit with other, similar-sized celestial bodies. Out of the three criteria for a celestial body to be declared a planet, Pluto failed one criterion.

It takes 248.09 Earth years for Pluto to make one revolution around the sun. Considering all the calculations, Pluto is expected to complete its first full revolution since its discovery on March 23, 2178. So, yes, a long way to go before its first revolution! (source)