A set of seven stamps talking stamps was released in the 1970s. The stamps are scaled down, one-sided, 33-1/3 rpm vinyl records capable of being played on a standard turntable. You can remove the backing paper and stick them on envelopes and letters as a regular stamp. The content of the playable stamps included Bhutan folk songs and histories of the country in English and Dzongkha, the local language. These stamps were invented by an American adventurer Burt Todd, a friend of Bhutan’s royal family. (source)

17. Bhutan is the world’s only carbon sink. That means the country absorbs more carbon dioxide than it gives out.

Bhutan has been lauded as one of the greenest countries in the world. Bhutan is not only carbon neutral, but it is the only country in the world that is officially a “carbon sink”. The country takes in more carbon dioxide than it produces. The country produces 1.5 million tons of carbon annually while its forests absorb 6 million annually. (source)

18. Bhutan is the first country in the world which has placed specific constitutional obligations on its people to protect the environment. Among its requirements are a stipulation that at least 60 percent of the nation must remain under forest cover at all times.

Considering that Bhutan is a small country, it’s commitment to the conservation of the environment is big. Environment and its conservation are one of the four pillars of Bhutan’s Gross National Happiness philosophy. As stated in its constitution, Bhutan must preserve 60% of forest wealth at all times. The country has the highest percentage, more than 51%, of protected land in Asia.(source)

19. Bhutan embraces traditional farming. It’s the only country in the world to turn wholly organic in its food production. 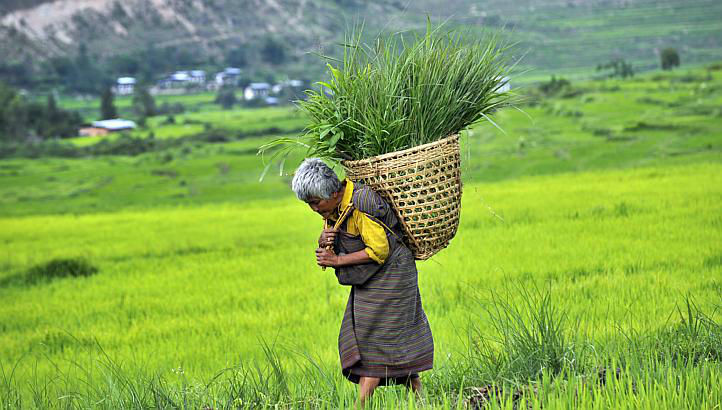 Bhutan will be the first country to turn wholly organic in its food production. The country has banned the sale and use  of pesticides and fertilizers within the country. Instead the farmers of Bhutan will use  their own animal wastes and farm wastes as fertilizers. With the return to the traditional method of farming, Bhutan hopes to contain the pollution caused by the extensive use of fertilizers and pesticides on the soil and nearby water bodies. While farmers fear that traditional method may lead to lesser yield, the politicians are confident that organic farming will lead to the high output of quality produce with the introduction of pest resistant crops. (source)

20. Earlier this year Bhutan planted 108,000 trees to celebrate the birth of their new prince.

Bhutan’s King Khesar Namgyel Wangchuck and Queen Jetsun Pema announced the birth of their first child on Febrary 5th. The tree plantation ceremony was held a month later and is a form of prayer for the newly born. (source)