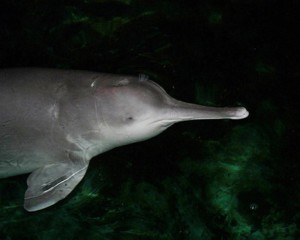 WUHAN, CHINA: An undated handout photo made available 13 December 2006 shows Qi Qi, a rare Baji dolphin who was rescued from the Yangtzi river in 1980 after being beached and injured, swimming in Wuhan Baji Aquarium where she lived for 22 years before dying of old age in 2002. A team of foreign and Chinese scientists have failed to find any trace of the endangered dolphin during a six-week trip on China’s mighty Yangtze river, making it all but certain the rare animal is extinct they said in a statement 13 December at the end of the six-week expedition. AFP PHOTO/INSTITUTE OF HYDROBIOLOGY CHINESE ACADEMY OF SCIENCES/HO (Photo credit should read AFP/AFP/Getty Images)